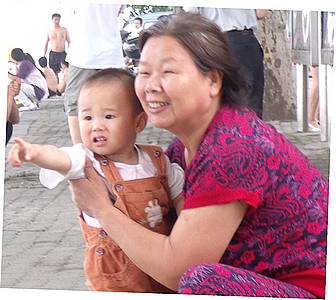 In China, baby love is obvious; parents and grandparents love to show off their babies. I've found this to be true wherever I go in China. Below are some pictures of babies in China, in various areas, interspersed with some observations about Chinese baby-raising customs.

This particular photo was taken in Wuhan beside Wuhan University, at a place where many people go swimming in a lake beside the Yangtze River. In Chinese, the Yangtze is called the "Chang Jiang" ("chawng jeeawng") which means "Long River". As with many lakes in Chinese cities, this one has a well-used strolling path along the side of it, where this Chinese grandmother was having some fun with her grandson.

Notice the swimmer standing in the background? To our left (the swimmer's right) was a U-shaped concrete dock 30m long stretching about 10m out into the water. This day, a dozen swimmers and a few fisherman were sharing the dock. I doubt the water was very sanitary, but I've seen Chinese swimmers in water that I'd hesitate to even dip my hand into.

In Jiading, a suburb of Shanghai, there is a park area that includes a temple and an examination hall where scholars would write the old Imperial exams. As with most public parks in good weather, there were a number of babies and young children around. Here you see see a couple of them playing around a traditional Chinese lion statue. 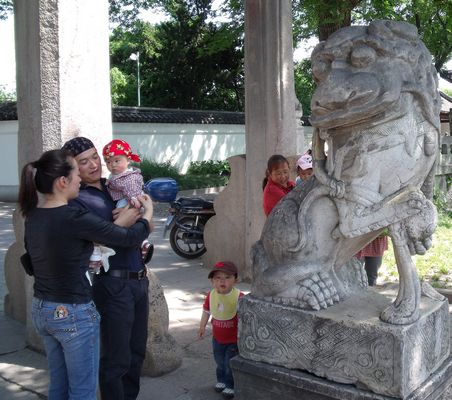 Here's a blow-up of the father and son from the picture above. It seems that Dad likes bandanas, so his son also got a little China baby bandana. 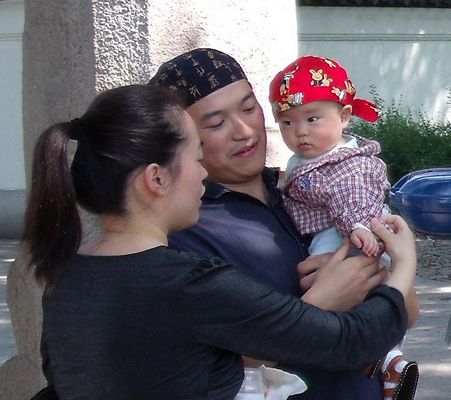 Although that was the first Chinese baby I've seen with a bandana, you rarely see them without some sort of hat. Here's a child with more typical headgear. 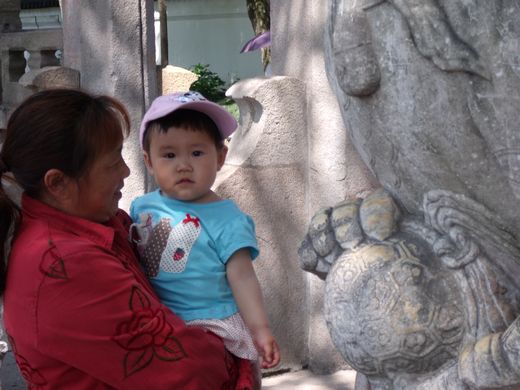 And here's the exception to the babies-wear-hats rule: in a shady garden pool area in Shanghai I spotted this scene. 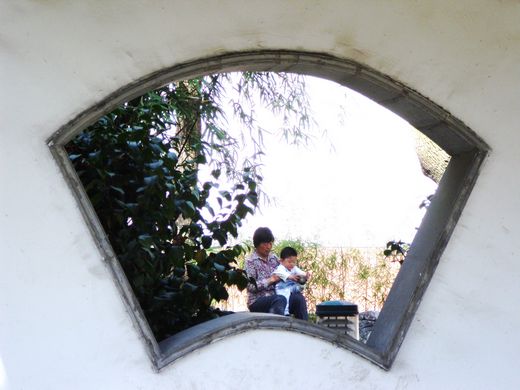 Public parks in China, including the one (shown below) in the city of Wuhu on the Yangtze river, often include pools or small lakes. Waterfowl are scarce (ducks and geese are for eating, not looking at) but very often there will be Chinese goldfish there. These are not the 5 cm long fish in Western pet stores; these are typically 20 cm long. Goldfish of this type have been bred in China since the Song Dynasty (960-1279) although beautiful fish ponds with lotus and lily pads were common centuries before that.

Maybe the mother and daughter below are looking at a school of what some traditional Chinese call "fairies covered with golden scales". [Photo by S. Voortman] 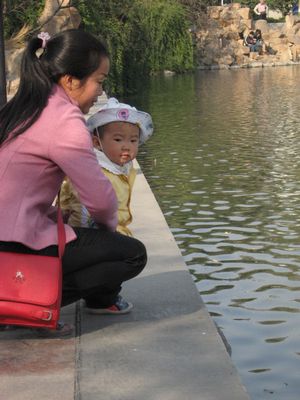 In June 2009 I went to a graduation ceremony in the city of Wuhan. Wuhan University is one of the largest universities in China and has a legitimate claim to having the most beautiful university campus in China. This is the wife and son of one medical doctor receiving his degree that day. 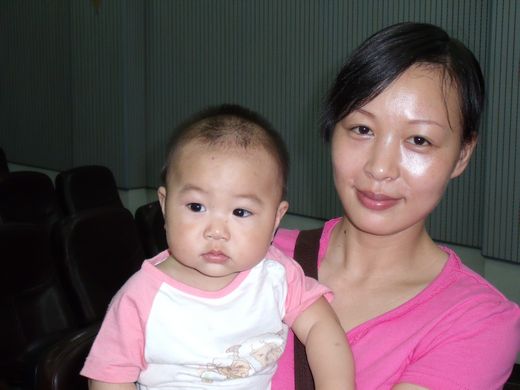 Beside Wuhan University is a fairly large lake and there I saw this typical scene for China: baby and grandmother out for a stroll. In China, baby care falls to grandparents very often. It is very common for grandparents to live with the family. In fact, because of China's one-child policy there may be some competition between the four grandparents about who gets to care for the single grandchild. 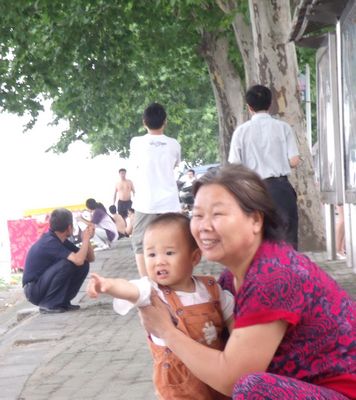 In China, a university campus is usually a community. Teachers and staff, as well as the students, live on campus. In the evening there is the traditional after-supper stroll, a prime time to show off a China baby.

Here is a picture of the grandchild of some proud grandparents at Wuhan University. Note the very nice stroller! Although China still has many poor families, the middle class is growing quickly and there is all sorts of expensive stuff for babies. With just one child, middle-class parents and grandparents are very willing to spend a lot of money to see that the child has the best. Department stores have a wide variety of baby paraphernalia, including very pricey imported strollers and cribs. 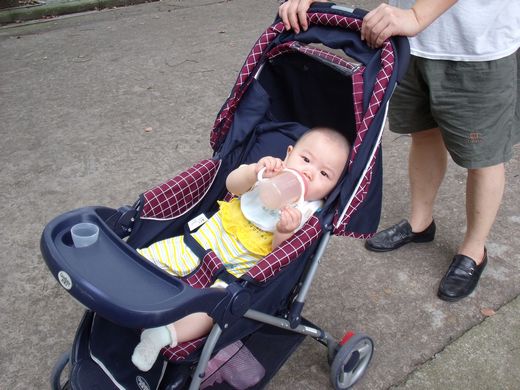 Most often though, you see Chinese babies being carried. Here you see a proud grandfather showing off his grandchild in the train station in Hefei, the capital city of Anhui province. With one child per family and an excellent, inexpensive railway system, it's pretty easy for a family to travel and you see lots of kids at the train stations. 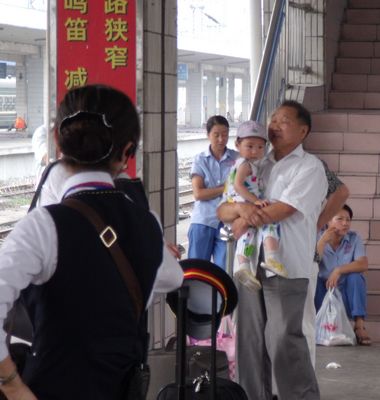 Let me end this collection of China baby pictures with a quick travel story. While sitting at the back of a long-distance bus, waiting for the ride to start, I saw what was probably an extended family group toward the front. Mom, Dad, and baby were there, and half a dozen other passengers were having a grand old time talking about how cute the baby was.

Maybe they were all just friendly fellow-travellers but something happened that made me guess they were relatives. Granny (I assume that's who she was) was holding the baby when she suddenly got up and took the baby to the side exit door of the bus. There she assumed the position (baby facing away, granny's hands under baby's knees, split pants gaping) and the group was laughing and almost cheering as Granny whistled to get baby to anoint the exit stairs. Strangely enough, seeing the enthusiasm for the China baby almost made me forget the less savoury aspects of the scene... almost.