Watching the people of China is a never-ending education

I love people-watching, and there are 1.3 billion people of China to watch! If you think they're all about the same, wearing their Mao jackets and carrying little red books, then your ideas about them are decades out of date, and were never very accurate anyway.

The Chinese people are not a mass of near-identical faces. In terms of looks, it may take us Westerners a while to easily pick up on cues that distinguish people's looks. For example, if you're used to classifying people by hair colour, then you'll have trouble since about 99% of Chinese folks have black hair. The 1%? Gray hair, though many elderly Chinese dye their hair to avoid it.

It is, however, increasingly trendy for young Chinese women to get a dark, red-auburn mixed in with the black, and in the cities you'll also see some wild-coloured punk looks too. 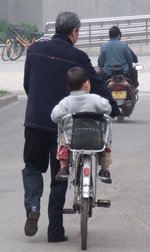 Everyday life in modern China is a mix of old and new. Twenty years ago everybody rode bicycles and cars were only for the rich. Typically it would be a company car complete with driver, whose status was proportional to the people he drove for. (I never saw a female car driver in those days.)

Now the folks in the Chinese middle class like to get cars and their own driver's licenses. The younger set likes motorcycles and even those less well-off can get electric bicycles at least. I'm not seeing as many donkey carts any more on the streets of my city, but they're still there too in places.

In the photo collections here, you can see for yourself what modern people of China look like. Of course, with a population of over a billion there are many personal styles. In the winter countryside many people don't care what they wear as long as it's warm enough. The young women of the cities, however, especially Shanghai and Beijing, are certainly up on the latest Western fashions.

You may be surprised that In China you can see the same looks and styles as people in other parts of the world. That's the result of China's "opening up" policy. No longer does China want to keep aloof from the rest of the world.

In most places in China, the locals can dress fairly much like Westerners and have no problem, although acting like Westerners can still be a problem, particularly for those in the countryside or less-developed places.

One great place for people-watching is Chinese streets. You won't see the big business types here; you see the ordinary folks in everyday life.

Chinese people love children, but some of their ideas of raising them are quite different from Western customs. For one thing, the littlest kids get dressed in so many layers of clothes that they look like little round balls of cloth!

Often grandparents have a big part in raising grandkids, particularly if they're already living with their grandkids' parents, as is common. Almost all kids age 2-5 go to you-er-yuan (pronounced "yo-are-you-en" = preschool) so that both parents can work.

Click here to see pictures of Chinese babies.
Click here to see more China baby photos. China has many private schools that charge a lot for tuition. We're talking the equivalent of thousands of American dollars per year, and there are enough rich people of China that such schools are everywhere. In these schools and in many public schools Chinese children have a uniform to wear, often something like a track suit. There are a lot of activities to build the students' identity as a group, but like kids everywhere, they naturally make small circles of friends.

I've been involved with universities in Canada and China for essentially my entire career. My impression is that, other than the obvious physical traits, university students in China are about the same as anywhere in the world. (Well, actually, in my opinion they tend to dress a bit better than the typical North American student.)

The people of China, and particularly the university students of China, are excited about the future. It's a lot of fun to be around them and see the enthusiasm.

Click here to see Chinese people on ordinary streets. What does a typical Chinese street look like? Busy. You run across all sorts of people: those making a living as well as those just hanging around.

Click here to see people in a Beijing hutong neighbourhood. Beijing's hutongs are popular visiting spots for the tourists, but they are home to many people. Here you'll see some photos of typical hutong residents.

Click here to see people of China at the Great Wall. See vendors and their wares (including cheesy souvenirs and some real art) plus other people in the souvenir area around the Great Wall at Badaling.

Click here to see Chinese babies. You can see cute and lovable Chinese babies almost everywhere you look in China. Here is a follow-up page of more China Baby photographs.

Return from People of China to Asia-Insider-Photos Home