The famous places in China that you've heard of are not the only interesting ones!

"Where have you been in China? What famous places in China have you visited? Which is your favourite?" My Chinese friends like to ask "lao-wai" this sort of question. ("lao"[=old] + "wai"[=outsider] = "foreigner".) 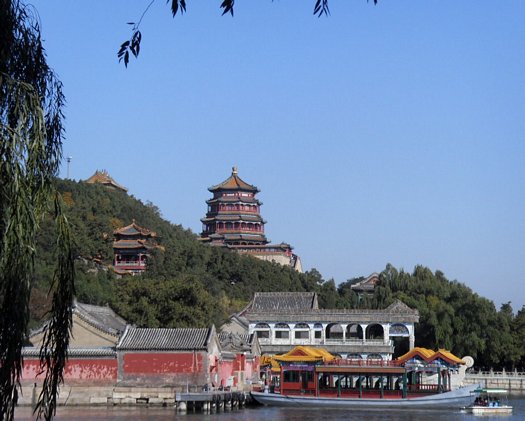 The first week I was in China, in 1991, I stayed in Beijing and went to the Forbidden City (a.k.a. "Palace Museum"), Tiananmen Square, the Ming Tombs, and the Great Wall of China. That was the standard tourist stuff with a bus and guide.

In 1991, a week after leaving Beijing for the school where I would teach, I was traipsing up and down the Yellow Mountains in Anhui province. Later my school treated us to a trip to Xian to see the tomb of the first emperor Qin Shi Huang and the terracotta warriors there. 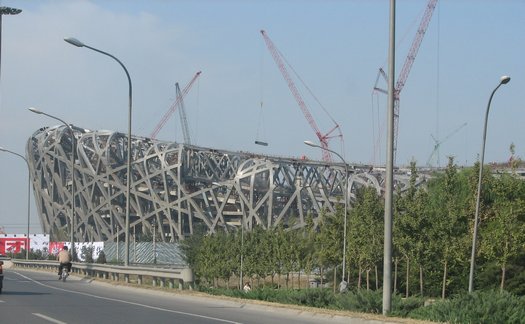 I've been to many other cities and famous places in China and they really are worth seeing (most of them anyway). But by now, after 15 years in China, the places that I find most interesting are the out-of-the-way and less-known sites. The photo collections here will include not only the tourist traps and big cities, but also the other places that insiders have found. 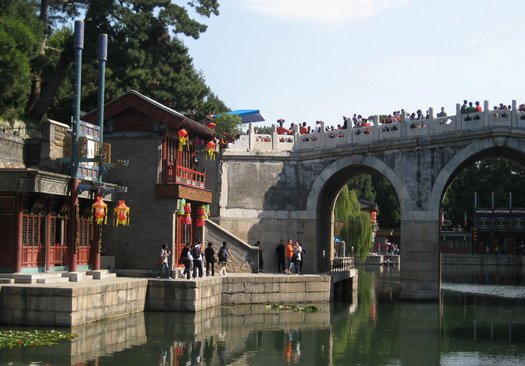 In the mountains and other wilds of China, the scenery is awesome but such Chinese scenery seems light-years away from the life of the 300 million Chinese people that live in cities. To show real Chinese life, the photo sets you see here include places tourists don't go, such as the neighbourhood markets and schools of China.

What you see below is a seafood stall in a Beijing market. 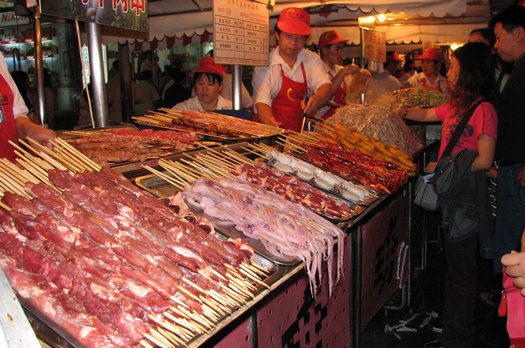 I live in a medium-size city called Hefei; medium-size for China anyway. It had about 1 million people when I first moved there in 1991. In 2011 it absorbed another nearby township to reach a total population of 7 million people, but that doesn't make it a major city in China. It is definitely not on the tourist track, so you see more real Chinese life. Click here to see some back street family stores near my school.

In the spring of 2012 my friend Paul Dishman, an accomplished amateur photographer, visited Hefei. Seeing my city through his eyes was interesting for me and may be for you too. He agreed to make these public domain photographs, and you can see three pages of them: Chinese Street Photography, Artistic Photography, and Chinese Pictures of Everyday Life.

The hutong neighbourhoods of Beijing are one of the traditional things that both tourists to China and insiders living in China like to see. A hutong is an old style of house with a central courtyard.

There used to be many, extensive hutong areas in Beijing, so none were particularly famous places in China. Now many have disappeared, replaced by modern construction. Some are preserved however, though they've been modernized a bit like getting electricity for the homes of the people who actually live there.

If you ever visit Beijing, you really should see one of these old areas. You can stay in reconstructed hutong inn hotels in the area north and a bit east of the centre of Beijing. Staying in such an area gives you a bit of the flavour of the not-so-famous places in China. My wife and I enjoyed a stay at such a place as shown on these two pages: Click here to see a hutong inn hotel. Click here for photos of a hutong courtyard and rooms. 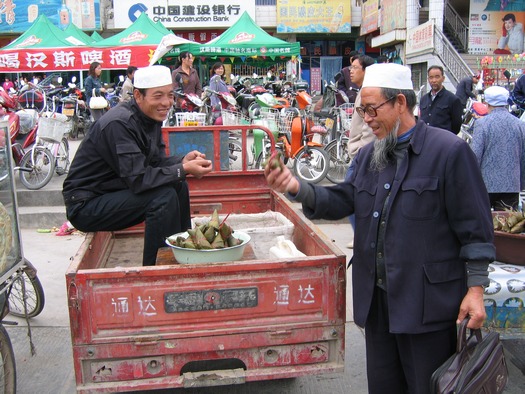 Few international tourists visit the Ningxia Hui Minority Autonomous Region because it is inconveniently located and quite underdeveloped. It is one of the not-so-famous places in China that you may not have heard of. There are some fascinating things there though. Click here to see Ningxia and find out more about its Hui people and the famous red Ningxia wolfberry.

Enjoy these photo tours of the not-so-famous as well as the famous places in China!

Click here for photos of family stores on Chinese back streets. There you'll see stores, a scary dental chair, and even a 43-year-old barber chair.

Click here for an artistic photography view of typical things in a Chinese city.

Click here for photos of the Great Wall of China. The Wall is one of the truly magnificent tourist attractions in the world and certainly the longest!

Follow the links below for a photographic record (with comments of course) of a trip to the Great Wall from Beijing. The first shows a typical modern train in China, one of the places in China a tourist might not go.

Click to see a hutong hotel in a traditional Beijing hutong area.

Click to see public domain pictures of Ningxia, one of China's poorest areas. Although it is not a famous place in China for tourists, it does have sevearal interesting areas and elements of its culture.

Return from Famous Places in China to Asia-Insider-Photos Home