What do you see on Chinese streets? Chinese people!

Walking down a street in China, you never know what treat the Chinese people have in store for you, whether it's something to eat or something to see. For them, it's just life as normal but for we "foreigners" it takes some getting used to, both the food and the sights! 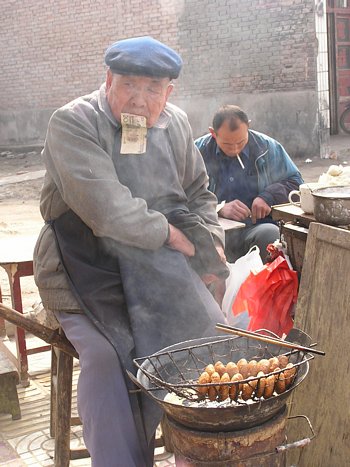 Outside of the tourist areas, there's always cheap food for sale on the streets. You've got to be careful - it's rarely as sanitary as you'd like. Some of us get the runs just thinking about it. Most of the people of China don't have a problem with it though. 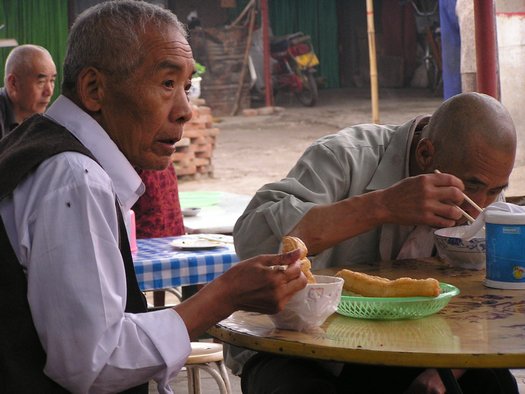 But there are safer places to eat, some where the cooks actually have uniforms! 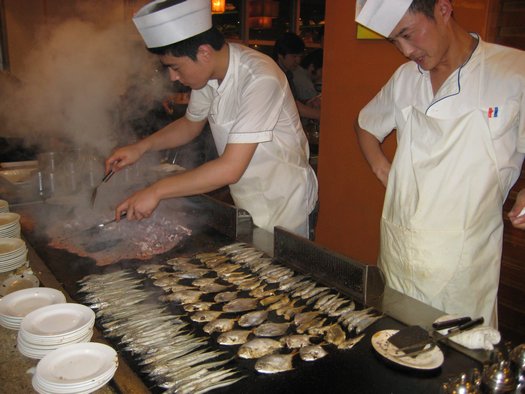 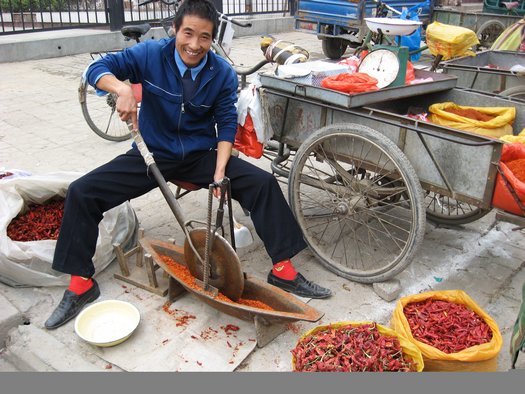 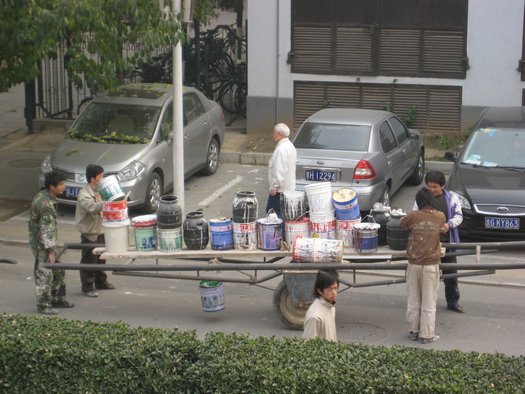 You can also see crews of workers going from place to place, such as painters like these. Sometimes you see them just hanging around on a street corner waiting for work. 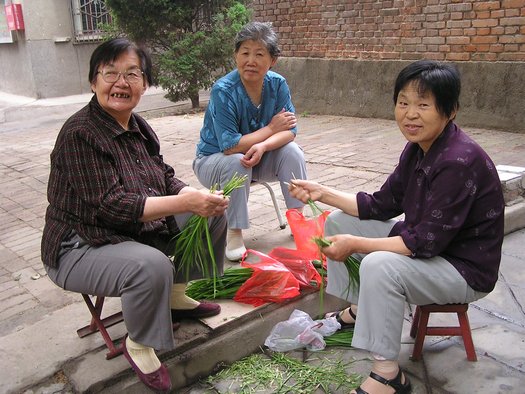 Outside homes you may see folks chatting away as they work at various household tasks like sorting out vegetables and preparing food for the family. They have kitchens inside but why not have more fun by making it a social event? Foreigners could learn a lot from Chinese people about a sense of community. Often they'll just sit around chatting and enjoying the sun, and not just because it's warmer in winter than inside. 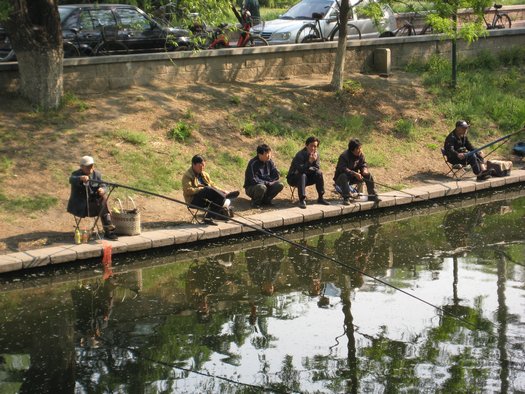 Many men like fishing and what you see above is a common sight around public ponds and rivers. I'd be afraid to eat the fish from public waterways but maybe these guys are really in it for the relaxation.

By the way, the people of China really know how to cook fish. I never liked fish growing up in Canada but here I've learned to enjoy it. Maybe it's because they're fresh from fish farms rather than ground-up fish sticks. In a restaurant you can choose the fish swimming in a display tank and have it cooked to order. 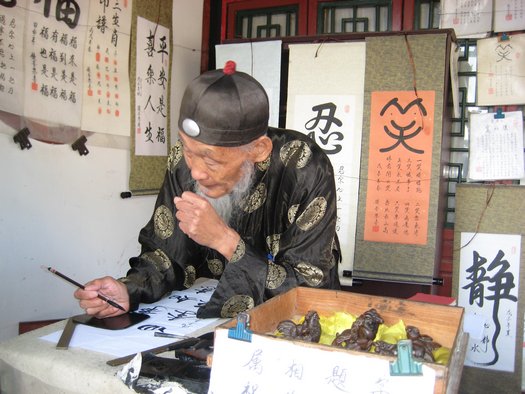 The people of China welcome visitors, as they did for the Beijing Olympics. In the tourist areas they're hospitable to a fault, giving tourists what they expect. It's nice to see, like the Great Wall, but don't get the idea this is the life of ordinary Chinese people. 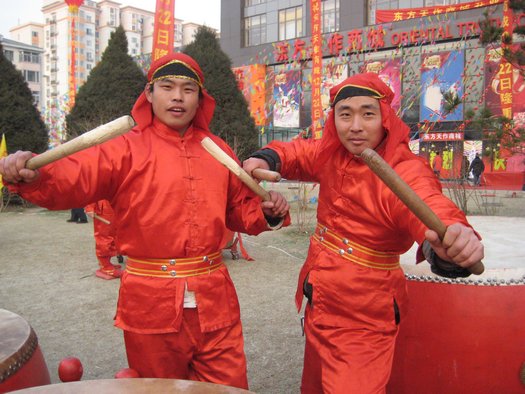 I imagine these street drummers put on a show that you might want to hear. In some places though, the street performers seem to have the idea that if they annoy you enough then you'll pay them to go away. 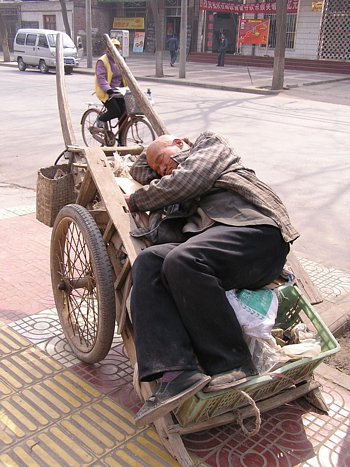 ... And then there are those less ambitious. Actually, it is fairly common to see folks napping after lunch. Most Chinese people have a "xiuxi" for about an hour -- it used to be a right enshrined in the Chinese constitution! Airplanes used to be delayed so the pilots could snooze!

That's not true any more. The public transportation in China has made vast improvements since 1991 when I first arrived. In the early 1990s on a 2-hour flight, the flight attendants quickly gave us a food box, then napped at the back of the plane for 45 minutes, waking up just in time to collect the stuff before we landed. You'd never see that today. 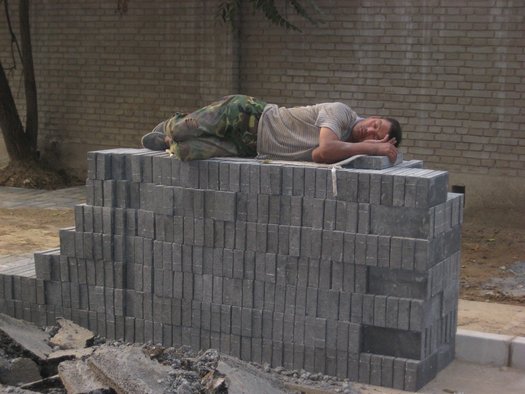 The common laborers though: they get up early and work long hours so maybe it's simply efficient to have a nap... wherever... to recharge in the middle of the day. Almost all of my students at a high-tech university have a hour's nap after lunch and they survive long punishing hours of study each day (and not just in my class). The traditions of the Chinese people may have evolved out of necessity. 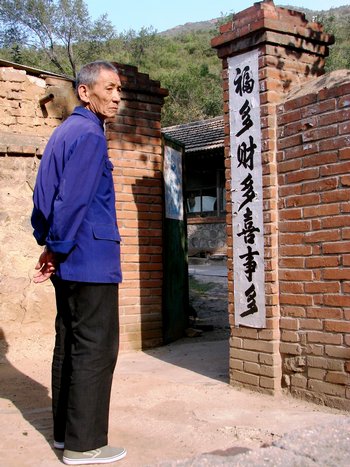 At the end of the day, everybody is tired. Maybe that's why this blue man looks so blue. He doesn't look like he believes the banner in front of him, which is all about happiness and luck. Many of the Chinese people I've met talk a lot about luck and fortune, particularly around Chinese New Year when signs like this (usually red, with traditional Chinese characters) are on doorposts and walls are all over the place.

Maybe traditional-minded people of China believe in luck and fate more than the university crowd I'm familiar with, but they all talk about it. It's deep-rooted in the culture, kind of like the Western dislike of the number 13. Among Chinese people the digit 4 is disliked because it sounds like the word for "death" and the number 8 is prized because it sounds like a word for blessing.

It's not really superstition, I think; now it's tradition that will never really disappear, and I'm glad about that. Culture doesn't have to change to suit cold, scientific outlooks; the Chinese culture keeps warm traditions alive for all of us to enjoy.