You may think that Chinese pictures actually show more than one country, but China is such a large country, in terms of people, that we really should expect that amazing variety. Paul Dishman, a friend who visited my university in the spring of 2012, took these pictures showing his view of my Chinese city, Hefei.

Hefei is not one of the huge, grand cities like Beijing or Shanghai, but rather it is more of an ordinary Chinese city off the tourist path. These public domain photographs show some of the lesser-known aspects of life in China, but include the memorial to Hefei's claim to historical fame: the famously incorruptible Chinese judge Bao Gong (also known as Bao Zheng) who lived 1,000 years ago. 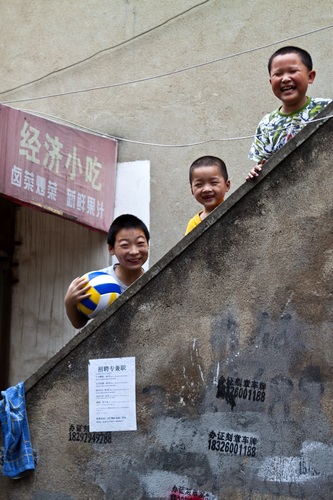 These three kids are typical with their huge smiles when meeting a foreigner. In my city, a foreigner is still a fairly rare thing so these boys might be talking about this for weeks.

Notice the numbers painted on the wall? That is, unfortunately, typical. Ads like these get painted everywhere and make many areas look ugly. In my apartment building many workmen who've been in have decided to paint their cell number on the stairs or stairwell walls. Companies that do renovations leave their ads painted on the outside walls. Nobody seems to mind too much so Chinese pictures often show such graffiti.

Another thing to notice here is the wires. Yes, some will be live electricity. Chinese streets often have dangers like that, including open manholes. The kids just seems to know to avoid them. 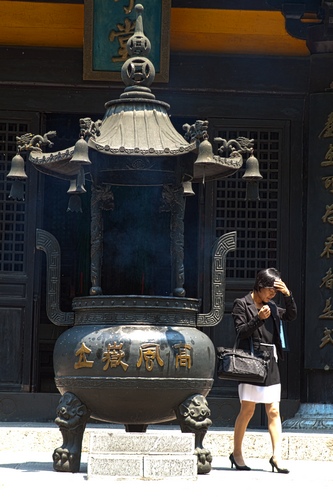 This one might be my favorite of Paul's Chinese pictures. I call it "Ancient solutions; modern problems".

You still see Buddhist temples in Chinese cities, although they're nowhere near as common as in Thailand. Some modern Chinese are looking to return to what they consider their cultural roots, and there's a modest revival of interest in Buddhism in China.

In this public domain photograph, you see the old incense burner and the modern woman walking by thinking of her modern issues. (Admittedly, that could be just that the sun was in her eyes, but let's be more imaginative!) 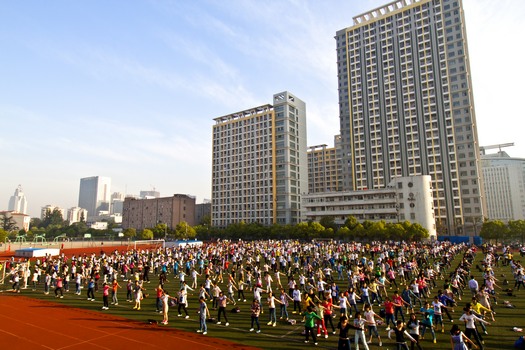 Above and below you see the 6:30am morning exercises at the provincial medical university. I don't see these mass exercises at my university any more, but in the 1990s in mid-morning the campus loud-speakers blared out music for an exercise routine that everybody was supposed to do. (Nobody did, even then.)

My middle-aged Chinese friends have told me that when they were young everybody had to learn the routine and they were expected to participate. Now it seems there's less of a "group-think" mentality, so I was surprised to see so many of the medical school students participating. It's sort of stereotypical of Chinese pictures - the mass of people doing the same thing.

The teaching of the routine(s) is still going on at Chinese primary and middle schools - I've watched recess "exercise" time at a couple of these schools recently. The students I saw were dutifully out in the courtyard in lines and a few were waving their arms around, but the watching teachers didn't seem to care if the students really exercised or not. Most of the students were content to stand there and talk to friends. (I should note though, that those were blazing hot days; they might be more active on the cold days.) 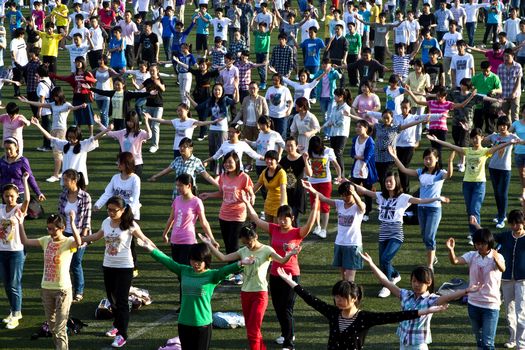 Although the students may dislike the public exercises, many middle-aged and older Chinese people do a variety of exercises in public. Walk around a Chinese city in the evening and you'll see exercise groups in various parks and open areas in front of buildings.

Some of these are dance groups doing ballroom dancing, traditional Chinese fan dancing,  or even Texas line dancing. For the traditional dancing, often a half-dozen old men will be playing instruments and 50 old ladies will be doing coordinated steps. It's a social occasion! 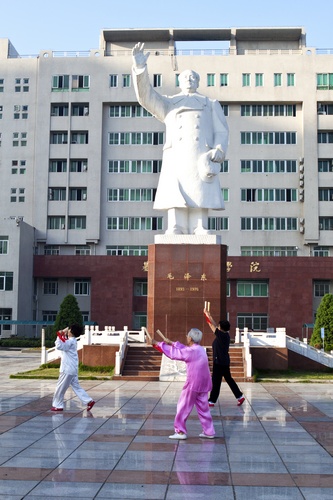 In the mornings you frequently see older people exercising individually or in small groups, often with Tai Chi moves and sometimes with a sword!

These ladies are doing that sort of exercise in front of a large Chairman Mao statue. I don't think it's because of any desire to honour Mao; it's just because it's a convenient open space.

You still see a lot of Mao statues in Chinese pictures, but although Chairman Mao is still honoured in China, he's not the focus of life  like he was 50 years ago.

Walking around any city in China, you see a mix of the old and the new. The Chinese people have a better sense of history that we North Americans do.

My city in China is Hefei, the capital of Anhui province, and most of the everyday Chinese pictures on this website are from there. The two photographs below are of Hefei's most famous historical figure - Bao Gong, also known as Bao Zheng. He was born in Hefei in 999 and rose to great prominence as a judge until his death in 1062. You can read more about him in the Bao Zheng article in Wikipedia. 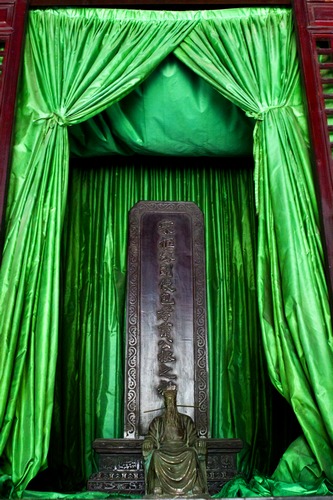 Immortalized as a character in Beijing Opera, Bao Gong is famed as a champion of the common people and an incorruptible judge. His reputation among the people gave him great power to defy even emperors. One of his famous acts was to execute the Emperor's son-in-law for bigamy and conspiracy to murder (his original commoner wife and children) despite imperial family intervention.

Bao's tomb is a tourist attraction in Hefei but locals have told me that the original tomb was destroyed in the China's cultural revolution and the current tomb is a reconstruction (i.e. a fake) in a more convenient place. One of my interesting early experiences in China was when a student lied to try to get me into the tomb/museum cheaper, to honour the upright, honest judge. 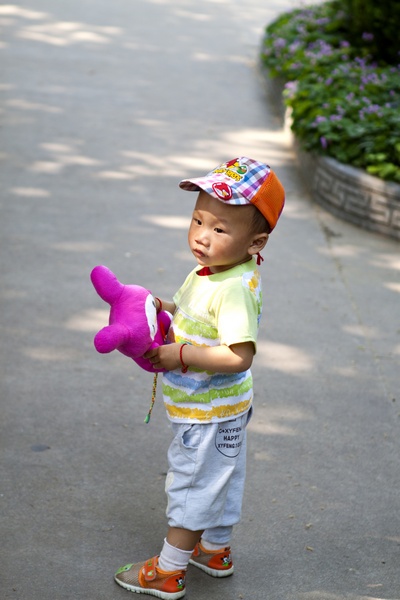 Let me end this collection of Chinese pictures with this one representing a new generation of Chinese people. Everyday life in China involves seeing a lot of kids like this. They're often out with grandparents.

Having English on children's clothing is trendy, forward thinking, inspiring. In this case, the boy's bum has the enlightening motto "C*XYFENG HAPPY XYFENG100%". It quickly becomes obvious to native English speakers in China that the important thing is to have English on the clothes, not that the English makes sense.

The Angry Birds hat? The English there makes sense but I doubt that many who see this kid realize that Angry Birds is a mobile app. Who cares?