Look on the back streets for the small family stores in China. 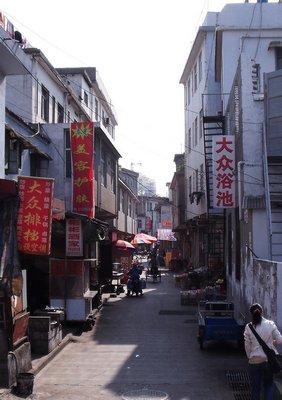 There are large stores in China; there have been for a long time. The large Chinese stores are now (2009) getting competition in the big cities from Western chains like Walmart, Carrefour, and Metro. There's a lot more interesting stuff available now and I'm thankful for that, but that sort of store is pretty ho-hum, boring, and unfriendly compared to the small family-owned stores on the street and stalls in the open-air markets. The real fun of shopping in China is going to the small stores!

It seems to me that the Chinese are by nature very entrepreneurial. Now that the government policy encourages the Chinese market economy, this trait is being seen more than ever. Go down any small street and you'll see shop after shop. On a larger street you might see one of the free market or open-air markets where there are anywhere from dozens to hundreds of booths selling fruit, vegetables, meat, spices, canned goods, clothing, hardware... you name it.

In this set of photographs, I'll focus on the street Chinese stores and a follow-on set will show Chinese market stalls. Other things are also sold by people who just bring stuff on a cart and sell on the sidewalk but pictures of those and of the bigger stores will appear on other pages.

Small stores in China pop up anywhere. Sometimes it's just a window in the side of a building. Many years ago, at Spring Festival time when almost all stores were shut down for a few days, I needed toilet paper. I found one of these little places open and, since it was my first year in China and I didn't speak Chinese, I tried to describe a roll of toilet paper with hand motions. The idea of a cylinder got communicated anyway - I was offered binder twine and fireworks, neither of which I considered an adequate substitute.

Look down a backstreet and there's a good chance you'll find some of the small family stores in China. Anywhere there's a small community of homes, and that's almost everywhere, little "xiao mai bu" [hsee-ow my boo] will spring up selling whatever people want.

Little hardware or household goods stores in China are everywhere. When shopping in China you'll see a LOT of cheap plastic goods, like you see here. It's pretty handy as long as you know approximately what they're worth. There's always the "friend" price, the "stranger" price, and the "lao wai" (literally "old outsider", meaning "foreigner") price. Speak some Chinese though, and you might get a "make a new friend" price, and you'll give them a story they'll enjoy telling for weeks. 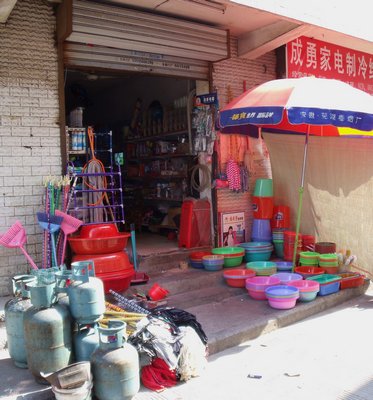 On a recent walk through a network of back streets, I ran across this barber. Look at the chair -- it's a cast-iron classic! He was proud to show off his shop and his chair. He said that the chair had been there for 43 years. It had arrived when he was only 15 years old.

I might try getting my hair cut here next time, just for the adventure of it. I wonder what he charges? At my school a haircut costs 5 yuan (about 75 cents) but at fancy salons it can be 15-30 yuan.

Update: I now go to this barber, Mr. Yun, regularly. At first he charged 4 yuan. After Spring Festival 2010 he apologetically raised the price to 5 yuan. 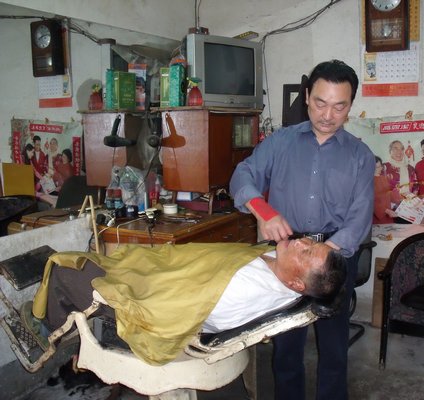 What is the state of dentistry in China? In Beijing, Shanghai, and other huge cities with a fairly large Western community, there are hospitals and dental clinics that rival anything in the West. In a typical city, however, the standards are significantly lower except maybe at a major hospital or dentistry school.

On the other hand, among the backstreet stores in China are some pretty scary-looking dental opportunities. It used to be that the dentist's chair was set up right in front of a window, so every passerby could see what was going on. I don't see that as much around my neighbourhood now, but I found this place. 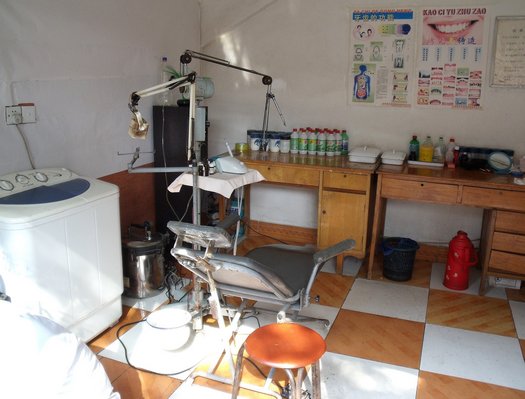 In the dentistry shop photo you see a little washing machine. That type is very common, though dryers are almost unheard of. Yet there are many small dry cleaners and laundry shops around. Some have big machines to do bedsheets and such, but a lot of their business is shirts, skirts, dresses, and jackets. 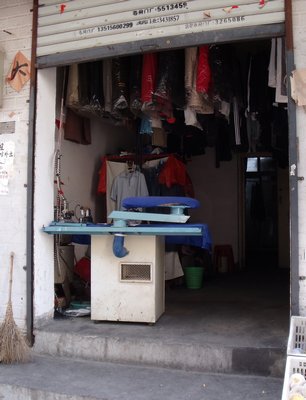 Sometimes you'll see little Chinese stores even on a main street. On one side of a wide street with three lanes each way, I found this place where you can pick your live chicken or duck and have it killed, plucked, and gutted as you wait. Such places are common in markets, but in this case it was just about a few paces away from six lanes of traffic. (Admittedly, it wasn't a busy street) 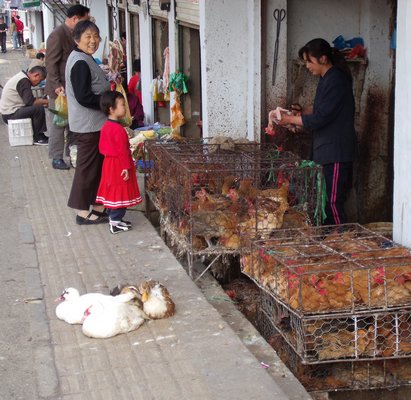 Further on and on the opposite side of the same street there are two buildings with a bit of space between them. At the street the opening was probably less than two metres wide, but inside there was a whole little metal shop set up. Those who run stores in China have to use initiative! 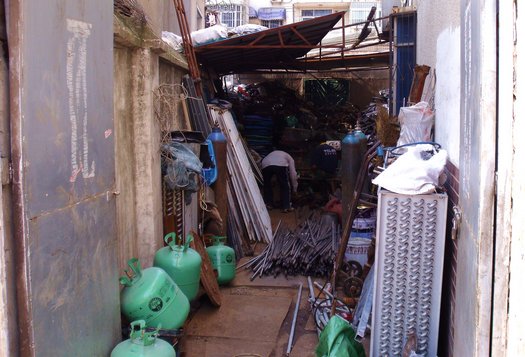 Come back later to see other pages about Chinese supermarkets, sales carts on the street, and what you'd see shopping in China at a typical neighbourhood market.