The street photography you see on this page was all done by my friend Paul Dishman, who recently visited my city in China. Although he is not a photographer by profession, he is certainly serious about it and has a good eye for photos. He has done some processing on these pictures but I have made no changes to what he gave me except to make the low-resolution versions for public domain distribution and, in the case of this first photo, to rotate it a bit. 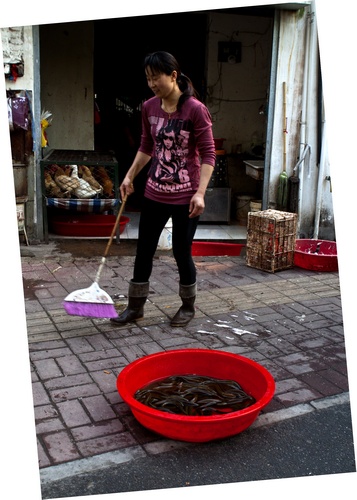 When you buy meat from street vendors, often you select the animal yourself!

See the cage of chickens and ducks? You take your pick and the lady will kill it before your eyes, pluck it, and present you with a fresh corpse.

Despite this service, many Chinese prefer to buy the live beast and it is not unusual to see a person riding back from the market with a live chicken dangling upside-down from the bike's handlebars.

As you can see, this shop also sells eels, live and wriggling. 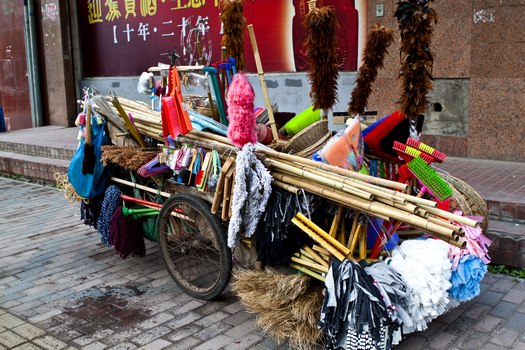 Except in the downtown of the big cities, China still has many street peddlers who walk around with their entire store on a cart. If you want anything brush-like, this cart is the place for you. 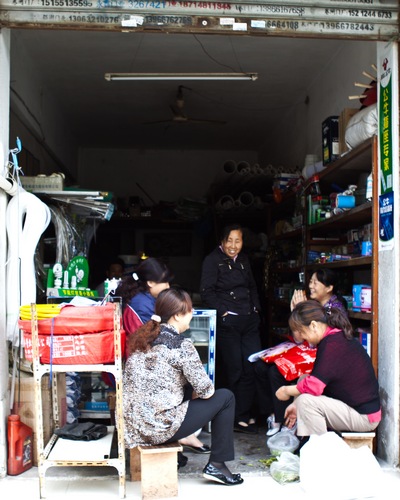 Little "hole in the wall" stores like this are a major part of the Chinese economy and you'll see many such places in Chinese street photography. Aside from making a living for somebody, these small shops are often neighbourhood gathering places. 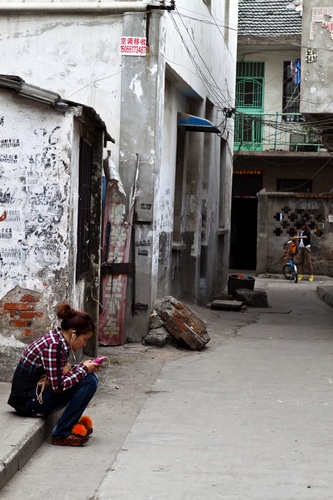 This is a typical back alley that could be found in any Chinese city if you take a few steps off the main roads. The young woman is fiddling with her cell phone or music player (it's probably both). That is very, very, very common. As in other countries of the world, young people are walking around in a world of their own, insulated from people around them by their earbuds.

The orange puffballs on the shoes are something I haven't seen before. Many (50%?) of young women wear six-inch platform heels in an attempt to look taller; casual pompoms on the footwear is a refreshing change in this street scene. 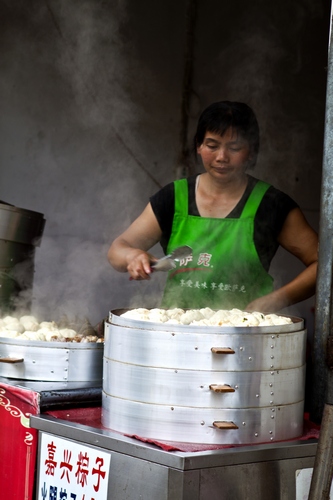 The sign in the photo above says "Jiaxing zongzi". Zongzi [dzong dze] are triangular pyramids of sticky rice, wrapped in a leaf and tied with string. Sometimes there are pieces of meat or beans added to the rice filling. Jiaxing is a city in Zhejiang province, which, apparently, is famous for zongzi.

What you see in the photograph, however, is not zongzi. This lady is selling steamed buns called "baozi" [bow (as in "cow") dze]. There are various fillings for baozi including vegatable and ground meat. The coating is a sort of bread-like, made of flour but not as fluffy as bread. A ground meat baozi dipped in ketchup and mustard is an interesting variation on a hamburger.

Both zongzi and baozi are steamed as you see here. The trays are usually bamboo, but some have a metal outside as you see here. Each tray has a bamboo mesh bottom that lets steam through it. Sometimes there's a sort of paper on the bottom of the baozi to keep if from sticking too badly.

The bottom of each tray fits into the top of another so the steam can go through a whole stack of these. I've seen them more than 10 trays tall and they're often the subject of street photography in China. 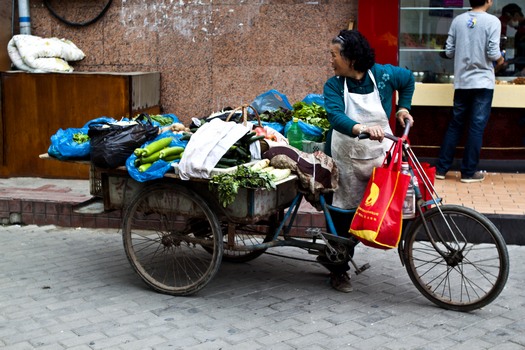 Here's another peddler. (By the way, the dictionary says "pedlar", "pedler", and "peddler" are all correct spellings.) In the suburbs of my city there are many carts like this selling vegetables and fruit. 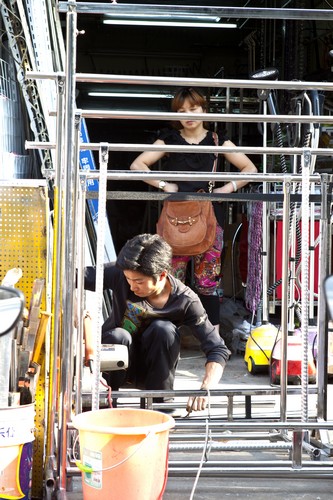 Among the small shops in my city are quite a number of metal shops like this one. Much of their business comes from making bars for apartment windows to keep the burglars out.

I thank Paul Dishman for giving me these examples of Chinese street photography, which he took during his trip to my university in the spring of 2012. It was fun to see my Chinese home city through fresh eyes.

Return from this street photography to the Chinese Places overview page