Tibetan Culture is more than just nomads, but nomads play a huge part in it. In the warm weather, the nomads are out in the mountain pastures with their herds of yaks and sheep. In the cold weather they come into Lhasa, the capital of Tibet for various reasons, and that's where I've seen them most. 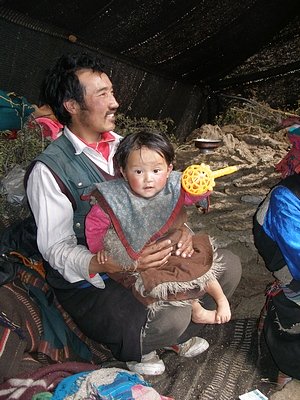 Here is a nomad father and his daughter in their tent near Dregom Hot Springs. In an interesting mix of old and new, the yak hair tent (below) has a solar panel to get electricity to play a stereo inside! You can easily understand that one reason for coming into the city in the winter is to have a warmer place to live, but that's not the only reason. The tents are heated by burning yak dung. For a while, the government tried to promote the use of coal but people were dying from the fumes. Dried yak dung burns clean and without as much danger of poisonous gases. As for the smell, with the yak smell soaked into everything... who notices? 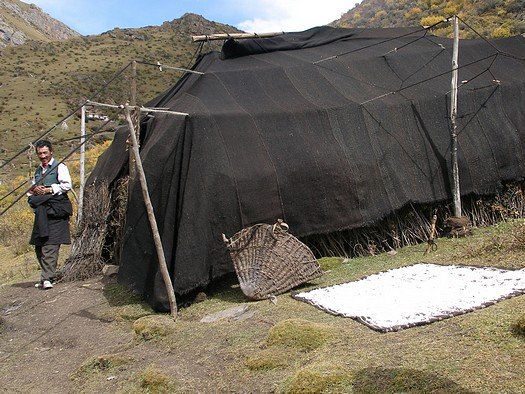 One reason nomads come into the city is to follow the demands of Tibetan Buddhism. Their religion tells them that they will be reborn after dying. The level of rebirth (priest, man, woman, yak, dog, bug...) depends on how much "merit" they have gathered during their lifetime. 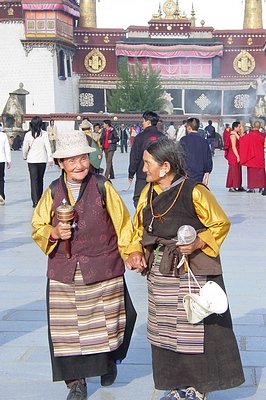 One way to gain merit is to walk around holy places; that is called a "kora". The centrepiece of Tibetan Buddhism is the Jokhang Temple in the heart of Lhasa, Tibet and all the nomads who come into the city do many koras around the temple. The neighbourhood around the temple is called the Barkor, which means the middle-length kora, referring to the path around the temple being walked by hundreds of pilgrims throughout the day. The Potala Palace is just a 10-minute walk away, so if they want they can also do a longer kora (the linkor) that goes around the palace as well.

In the magnified view below you see some symbols of Tibetan culture: the beads and the prayer wheels. The wheels are spinners mounted on a short rod as you see here. Inside are prayers written in Sanskrit and printed on paper. Every spin of the wheel is supposed to bring some merit, and it apparently doesn't require any attention or focus while you do it, since people merrily chat away as they do their koras. 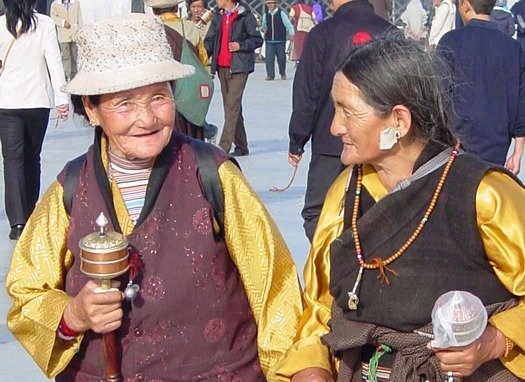 The beads you see here are pretty tame. Traditionally, many Tibetans buy jewelry as a way to store money. I'm not sure it's much of an investment opportunity, but it's easy to carry. All around the Jokhang Temple there are jewelry shops but I suspect most of the nomads coming into Lhasa cannot afford the expensive pieces. They're often seen begging for food. (That's not much of a shame in Tibetan culture - in fact it gives others a chance to gain merit by giving money to them.) 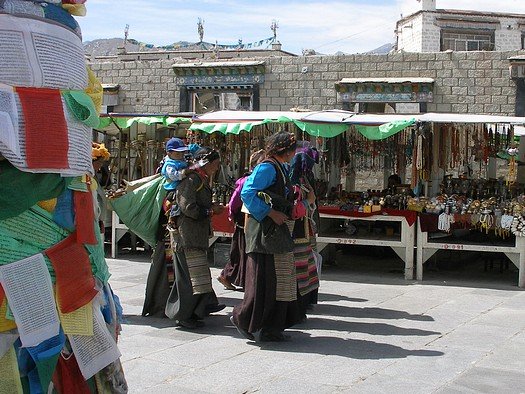 Here you see a group of four Tibetan women doing a barkor, that is, walking the circle route through the neighbourhood around the Jokhang Temple. That takes about 10 minutes at a slow pace, more if you stop to look at all the stands selling stuff. 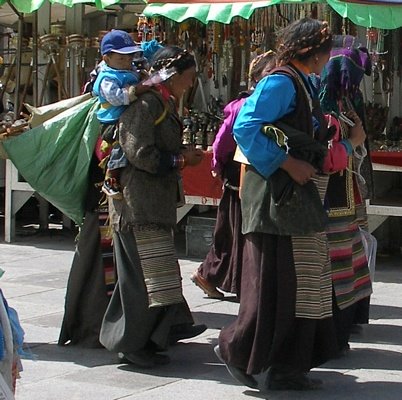 I can't guarantee that these are actually nomad women as opposed to residents of Lhasa, but from their dress it is likely. Notice the colourful aprons. This is a more traditional mark of Tibetan culture. Apparently, the aprons used to signify that the woman was married but culture, even Tibetan culture, is always changing and now unmarried women also wear them. Notice the two different designs. Most likely the flashier colours are worn by younger or unmarried women. 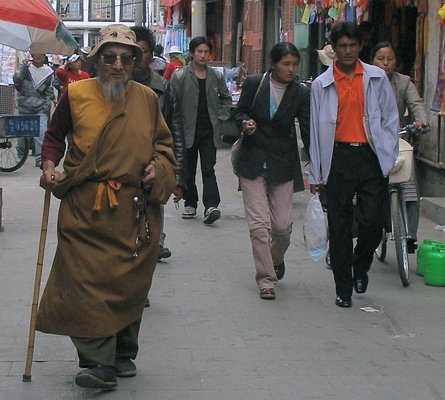 Here you see an old(-ish) man walking a kora through the Barkor. He is wearing a traditional but plain chupa - the brown robe. Notice that he has one arm out of its sleeve. That has nothing to do with Tibetan culture; it's just because a chupa is too warm when the sun is out. Lhasa, Tibet's altitude is about 3,600m (12,000 feet) and with that much less atmosphere above it, Lhasa's sunshine is very intense and warm. On the other hand, when the sun goes down, the warmth of the chupa is needed.

Notice also in the picture above the two modern young Tibetans walking near the man. You see this type also doing koras, though not as many. Although they may not dress traditionally very often, young Tibetans often will respect traditional Tibetan culture and view the koras as part of that. (Or maybe this couple is just shopping in the Barkor, which is also a common activity.)

Here you see a couple of Tibetans who are definitely nomads, dressed in their finest (and warmest) pink and red. Notice the warm fur lining of their chupas peeking out. Notice also the fine earrings. As mentioned previously, a Tibetan culture tradition is to have family money "stored" in the form of jewelry so it's not too surprising to see fancy and expensive-looking jewelry even with a dingy old chupa. 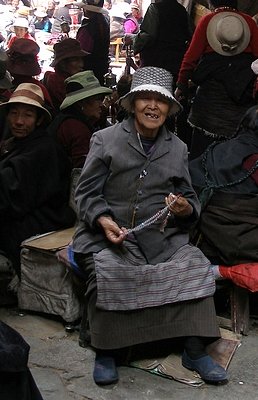 At one place near the Jokhang Temple, there's a rest area where weary walkers can take a load off their feet. This lady seems very pleased to be there. She has prayer beads in her hand, and the traditional women's apron. The hat is definitely not traditional but many people wear hats like this - it seems there's no Tibetan cultural tradition to follow for headgear. In fact, you see a lot of cowboy hats, some manufactured domestically but the expensive ones actually imported from the United States! 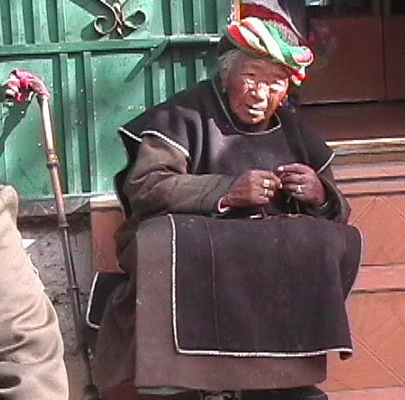 An old Tibetan woman is called a "mola". This tired mola is resting on the step of a store in the Barkor. Tibetan women sometimes weave colourful yarn into their hair but this mola appears to be wearing a twisted bundle of traditional colour cloth on her head. She's also wearing a sort of extra smock over her chupa. I've not seen that before. It could be that she's so old she needs the extra warmth, or maybe she's a Buddhist nun, or maybe she's a follower of "Bon" (pronounced kind of like the British pronunciation of "burn" - without the "r" sound).

Bon was the traditional Tibetan religion before Buddhism. When Buddhism arrived in Tibet, it merged with Bon, adopting things like koras and prayer flags to invent the unique Tibetan form of Buddhism. You can tell the Bon followers from the others doing koras; the Tibetan Buddhists always walk clockwise but Bon followers go counter-clockwise. 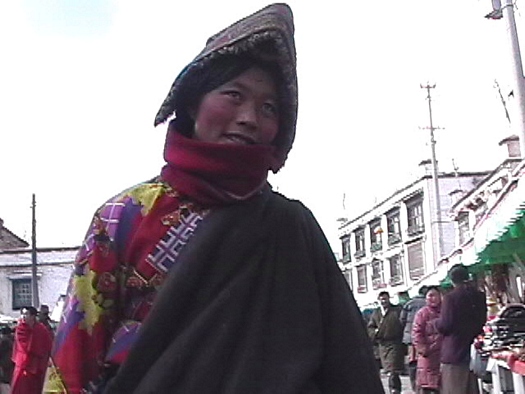 This young woman in the Barkor has a colourful sweater under her warm chupa. She also has what looks like a very warm hat... 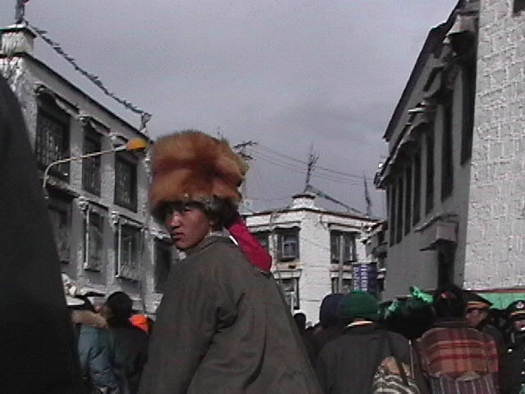 ... though perhaps not as warm as this hat.

The Barkor area of Lhasa, Tibet is where you'll see the most facets of traditional Tibetan culture. The nomads of Tibet, seen constantly doing their koras around the Jokhang Temple, keep much of this culture alive and are a colourful part of life in Lhasa.

Return from Tibetan Culture and Nomads to Tibetan Pictures Overview