Yearning for yak pictures?
Here you are! Hairy, useful,
good-natured, and smelly
(the yaks, not you or the photos)

Yak pictures show a shaggy beast that is quite docile despite its wicked-looking horns. Here are free pictures of yaks in Tibet, with comments by people who live in Tibet. If you run across them on a hike in the mountains, they'll mostly ignore you unless you get too close, and then they'll just stare at you for a while, like these ones.

On this page I'll just show domestic yaks (and remember, all these are public domain photographs, so feel free to use them as you wish). Wild yaks are hard to photograph because they're so rare. Until 1994 the wild yak was on the endangered species list; now it is still "vulnerable" and found only in remote places. The domestic yak is definitely NOT an endangered yak - there are about 12 million of them in the world. In some places in Tibet, your road trips will be interrupted by herds of the beasts. 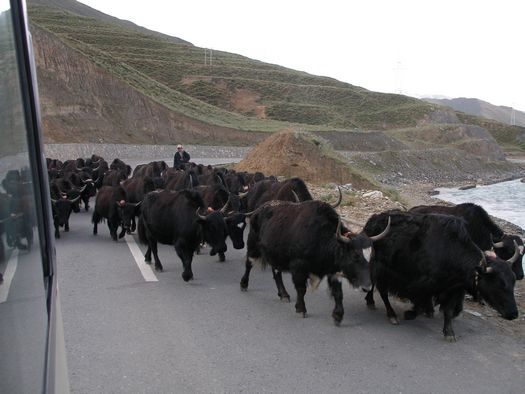 Below are a couple of yak pictures taken during a Qinghai Tibet railway trip. You can take a train all the way from Beijing to Lhasa, taking two days. Although it costs about half as much as flying, that's not the attraction for most people - it's the beauty of the surroundings that makes the trip memorable. Once you get into the mountains you see magnificent scenery, with many opportunities for pictures of yaks and mountains. 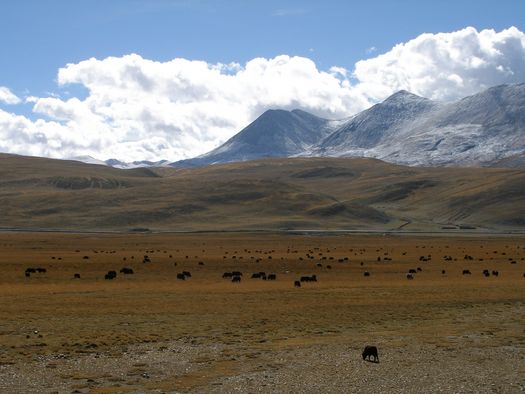 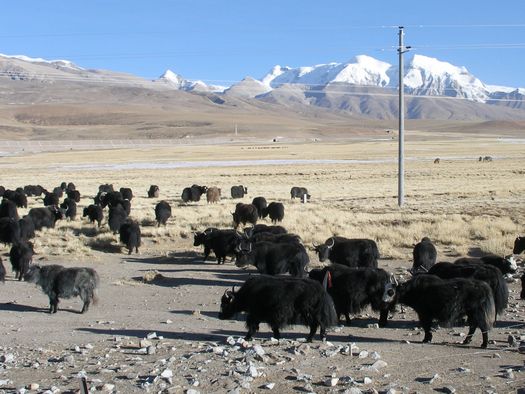 The yak has a central place in Tibetan life and culture. In Tibetan, a female yak is called a "dri" but I'll follow the general practice of using "yak" to refer to both males and females. A different page will talk about yak products and their use in Tibet; this page will focus just on yak pictures. As with all photographs on Asia-Insider-Photos.com, these are public domain pictures taken by me and my friends, and you are welcome to use them. 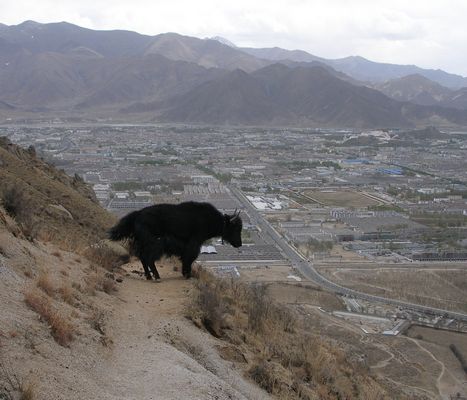 Through my apartment window in Lhasa I could see the holy mountain called Poombaree and sometimes spot yaks grazing there. In the picture above, you see a young yak on another mountain north of Lhasa. Look carefully and you'll see the back of the Potala Palace in the valley below.

The "scent" (some would say "stench") of yak pervades Lhasa, the capital of Tibet. Most of that comes from the yak butter lamps burning constantly around Tibetan Buddhist sites. The beasts themselves are rarely seen on the street of Lhasa, except in pieces around the butcher shops. Go five minutes out of the city though, and you'll be in fields and mountains where the yaks roam. Here's the same young yak, with Sera Monastery showing below. 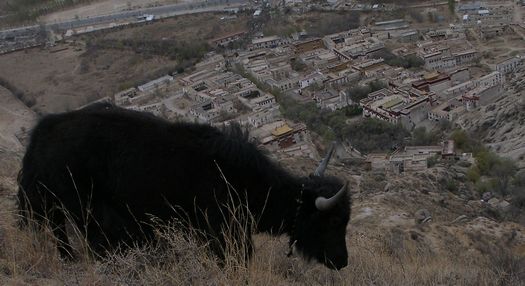 Some Tibetan Buddhism paintings feature a blue yak, and the term "blue yak" has been used as a trendy name for blogs and businesses. This photo shows that some yaks do have a blue tinge to their hair. Although I do a bit of touch-up on many photos on this website, usually just to compensate for underexposed shots or trim off the uninteresting parts, this photograph below is exactly as I got it from a friend, so the colour is authentic. 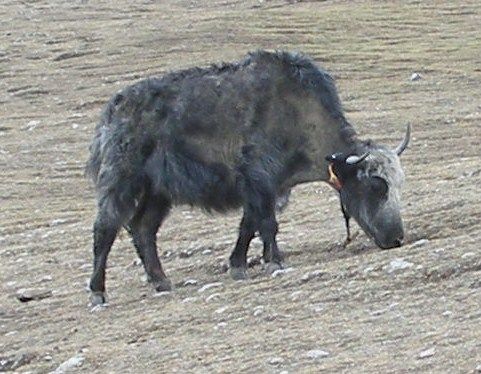 There's not a lot of thrills in the life of a yak. Eat, rest, eat, rest... Notice that in this photo you can see a blue tinge to the yak hair. 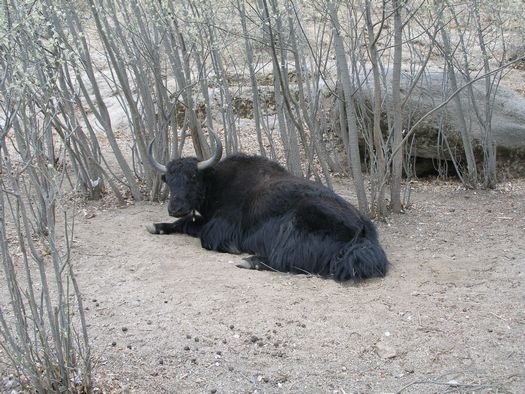 Most yaks though, are black with a bit of white. The one below has more white than usual. 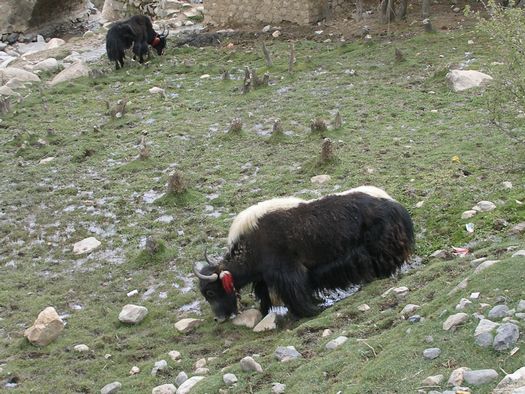 Some yaks are basically gray or a dirty white, as seen here. 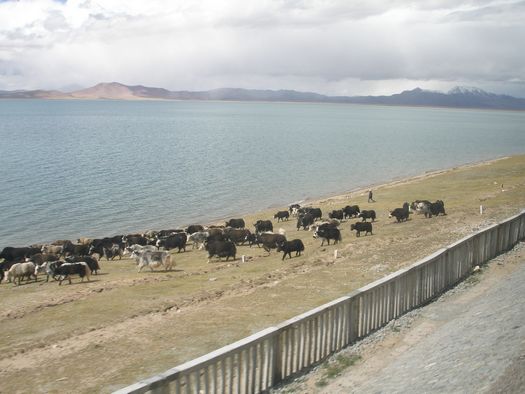 Some of the black/white pattern may come from cross-breeding with cattle. Compared to pure-bred cattle, the cross-breed uses less of what it eats for maintenance. In other words, it uses food more efficiently. See www.mcrobertsgamefarm.com website for more information about cross-breeding yaks and to learn about yak farming in the United States.

But why cross-breed at all, you ask? A full-grown yak can weigh about 600 pounds (270 kilograms). Full-grown cattle can be twice that weight. Yaks are smaller and more efficient animals - just what you'd expect for an animal adapted to altitude over millenia, but not exactly what you want if you're aiming for meat production. The cross-breed, called a "dzo" for male and "dzomo" for female, have intermediate size. Dzo are sterile but dzomo are very able to reproduce. Likely, much of the yak population in Tibet is not pure yak after so much interbreeding over many years. Below are a team of dzomo (dzo?) ready for plowing. 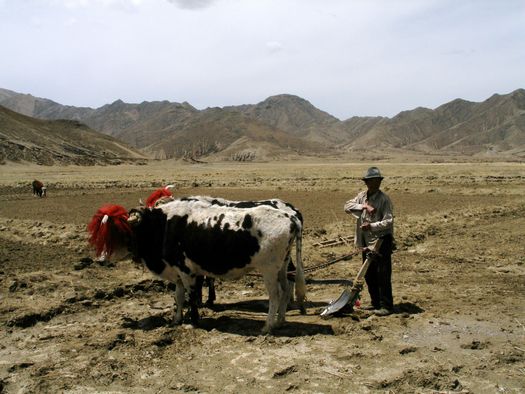 In the fields outside the capital of Tibet, and anywhere field crops are grown, it is common to see yaks used for plowing. Here are a couple more yak pictures proving how useful yaks are in Tibetan life. 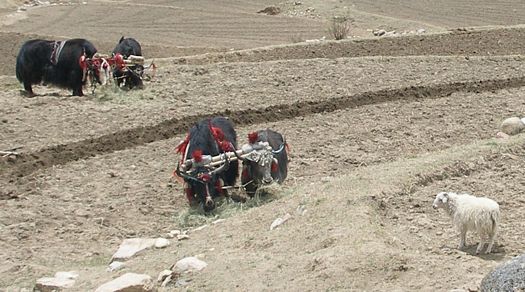 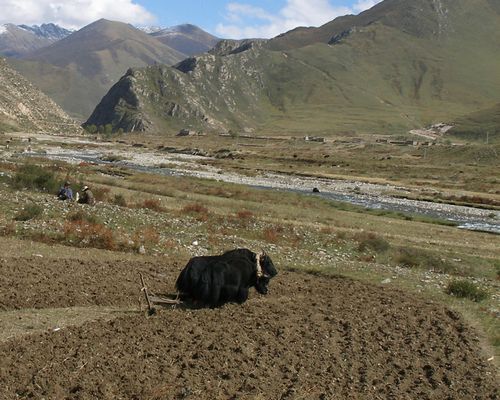 Let me end this collection of public domain yak pictures with some magnified views of this magnificent animal. Life in Tibet would be unimaginable without the yak. 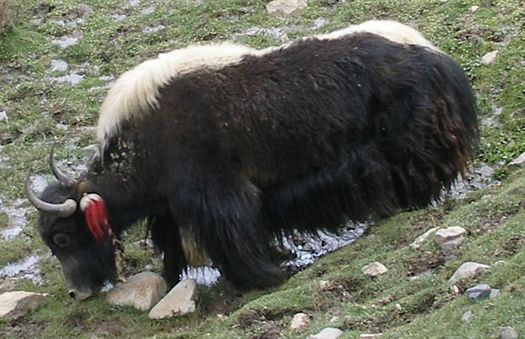 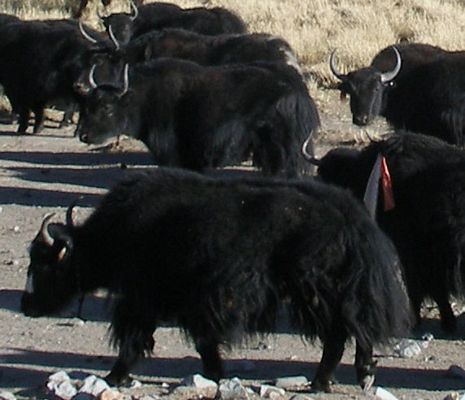