Mainland Chinese People:
A faceless mass or
a mass of faces? 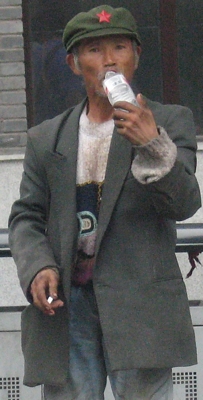 On this page are pictures of some of mainland China's 1.3 billion citizens. Chinese people are unknowable as a mass, but look into their faces and try to see them as individuals; you'll find folks who are charming, pushy, funny, pitiful, peculiar...

Any type you can think of, China's got it. Here are some of the characters I saw on a trip to the Great Wall at Badaling, plus some of the not-so-famous places and things you can see there. 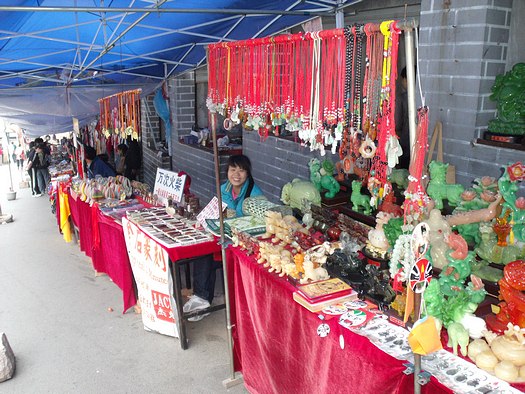 This page is part of a series documenting a trip to the Great Wall at Badaling. After a couple hours of walking on the wall, I got off it at a place where it was close to the valley floor. A short downhill stroll and I ended up near the bottom station of the sliding car ride.

BAM!! We're back in commercial China. As you can see in the picture above, there are scores of stands all selling souvenirs ranging from cheesy to beautiful. It is common in China to see many souvenir stands together at tourist sites, all selling roughly the same thing.

While it is understandable that all the souvenir sellers would be stuck together at such sites where commerce is controlled, the same sort of thing happens in many Chinese cities. Go to one part of the city and you'll find a whole street of electronics parts stores that you will NOT find anywhere else. Maybe Chinese people like to see all their choices together to comparison shop, but it surprises me that sharp Chinese entrepreneurs don't open more shops where the competition is not. 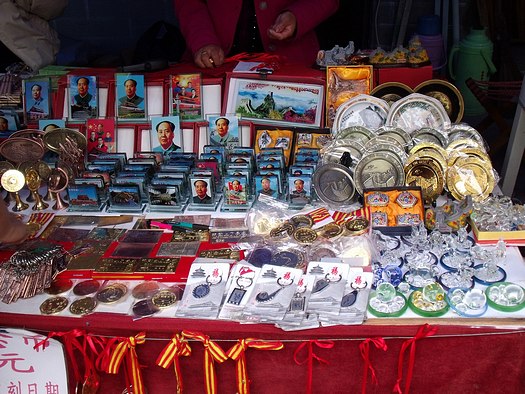 What could be cheesier than Chairman Mao souvenirs? In any city in China, you can find antique stores and most sell Chairman Mao memorabilia. Some of it - pins, little red books, and so on - are probably genuine. The stuff you see in the picture above? All modern, though possibly modeled on original stuff. What do these sellers think of Chairman Mao? It doesn't matter. The tourists buy this stuff so they sell it.

Many of the "antiques" sold in China are fake. The southern city of Guangzhou (formerly called Canton) has a whole market known to local Chinese people as the fake antique market. In the 1990s a guy there tried to sell me a telephone of the type you see in the 1946 movie "It's a Wonderful Life". He claimed it was 150 years old. That would make it pre-date the invention of the telephone by about 20 years. Cool! A time-warped telephone! 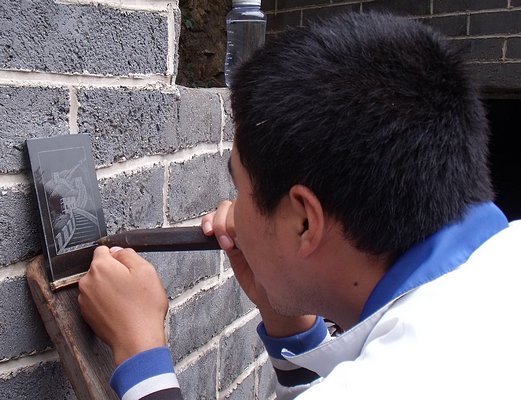 In among the souvenir stands, I ran across this guy. He was using a chisel to carve delicate pictures onto black tiles. It was evident that he had real artistic skill, whereas the other sellers just bought stuff from a factory. It was refreshing and I stopped to watch him for a while. 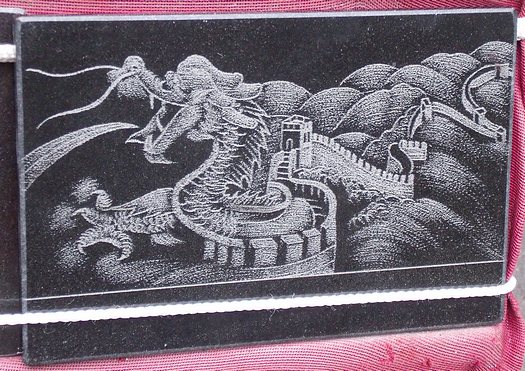 This is the tile carving I liked the most. I doubt that it's an original idea to combine the icons of the Great Wall and the Chinese dragon, but this was skillfully and cleverly done, as you can see here.

I regret that I didn't buy this particular tile carving. The artist's first asking price was 150 yuan (about US$25). He came down on the price a couple of times and finally offered it at half that price as I walked away. If you ever go there and see him, buy one. I wish I had. 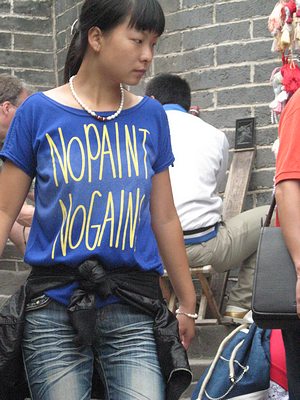 This young woman walked by the tile artist and a friend of mine got this photo. Young Chinese people like T-shirts with trendy English slogans on them. I suspect though, that factories that botch the English dump the T-shirts refused by Western importers on the unsuspecting semi-English speakers.

It is common to see mangled English like this. At one park I saw a young woman with a green T-shirt proclaiming in huge letters "THINK GREED".

Sometimes the English is OK, but the implications are a riot. I've seen a slender, fashionable, young woman wearing jeans that have the word "BUFFALO" in 5cm-high letters across the butt. I've also seen a pleasant-looking teenage girl wearing a T-shirt that boldly proclaimed "Angry Pig". 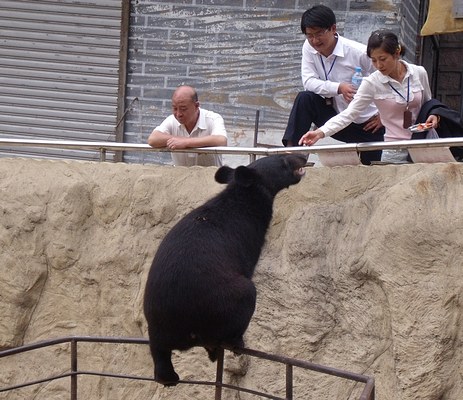 Anything to make a buck. There are bear pits at this Great Wall of China site. Here, for a couple of yuan, tourists can throw carrots and such to the young bears who enthusiastically crawl up on railings to catch the food. While it was somewhat interesting to see how good the bears' balance was, it struck me as super-tacky, like old zoos in the West a couple hundred years ago. The guy on the left in the photograph above doesn't look very enthusiastic either. 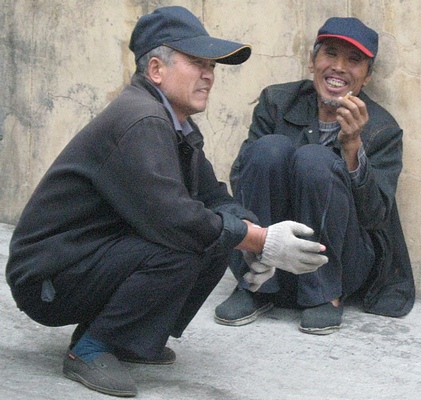 Often, when I find myself looking at Chinese people like they were specimens in a zoo or laughing because they don't "fit" what I think is normal, I run across reminders that I'm just as peculiar and amusing to them. These two guys were laughing and grinning away at the silly foreign tourists like me.

I don't mind supplying a laugh for them. I'm also sure that my feeble attempts at speaking Chinese bring to Chinese people even more entertainment than their attempts at English bring to me. Two years of formal Chinese language education and over 15 years living here let me speak Chinese well enough to be understandable, but often in a hilarious sort of way. When a difference in tone is the only thing distinguishing words such as "mother", "horse", and "curse", there's lots of entertainment potential. Oh well. 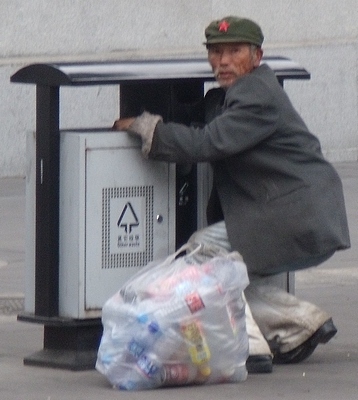 As I was leaving the Great Wall area, heading to the train station to go back to Beijing, I spotted this fellow. Many poor Chinese people make their living gathering plastic bottles for recycling. Those of us who live here don't spend much effort to separate recyclable material in our garbage, because we know the garbage will be sifted through by folks looking for anything of any value.

Looking at this guy, I wonder what his life story is. Is he a displaced factory worker? Why the Chairman Mao cap with the Red Army star? Does he make a good enough living at what he does? Does he support a family? What is his attitude toward the astoundingly rich tourists he sees every day at the Great Wall? What did he think of me? I admire him for taking the initiative to work this way rather than beg, as many do in the cities (but not at the Great Wall).

This fellow is a reminder to me that the jet-set business, industry, and government leaders who have brought about the astounding progress of the Chinese people in the past 20 years are at the top of the heap, and others most definitely are not.

Go to the next Great Wall trip page: Trains and buses back to Beijing