Train travel in China is convenient for many trips, including our trip back from the Great Wall at Badaling to Beijing. After our climb on the wall, let's head back to the train station. On the way, we pass a hundred people or so in a lineup for the bus. 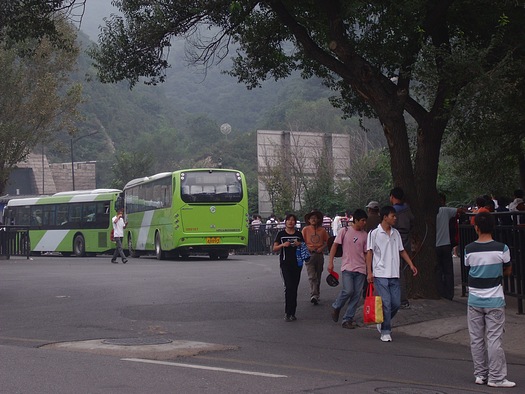 This is the bus stop for a bus that runs between Beijing and this Great Wall of China location. Bus 919 is a regularly running public bus. There are, of course, many tour buses that come here but they're expensive. This bus is a good cheap alternative.

You've got to beware of tour bus scams, and even with bus 919 there are some traps to avoid. Here's a page explaining a tour bus scam, and how to take bus 919 to the Great Wall. All in all, I'd say it's better to take the train and my friends who live in Beijing agree that in this case, the train is the way to go. 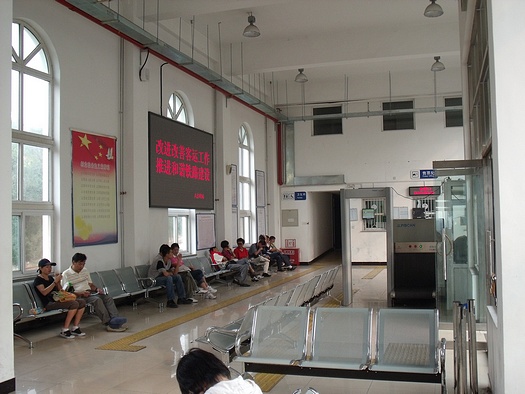 Here's the train station at Badaling. Train travel in China involves some huge train stations, but here you see the other end of the scale. The entrance to the station is on the right just beyond the row of chairs.

The first thing you do when you come in is put your luggage through a scanning machine. Chinese train stations all have luggage scanners now, just like airports. One thing they're looking for is fireworks, which are (thankfully) forbidden on trains. I don't know what sort of dangerous stuff they think might be brought into this station, but the scanner is there anyway as a standard precaution for safe train travel in China.

Straight ahead beyond the scanner is the ticket window. I had a nice chat with the ticket man - a very friendly guy. Most Chinese service people are quite friendly when they find out I can speak Chinese. The fact that I'm Canadian doesn't hurt either - everybody like Canadians.

There are two Canadians who are known and liked by almost all Chinese, but almost unknown in Canada. One is Dr. Norman Bethune, who died in 1939 trying to save the lives of Chinese soldiers and who was memorialized in Chairman Mao's little red book. That is still studied in Chinese schools today. 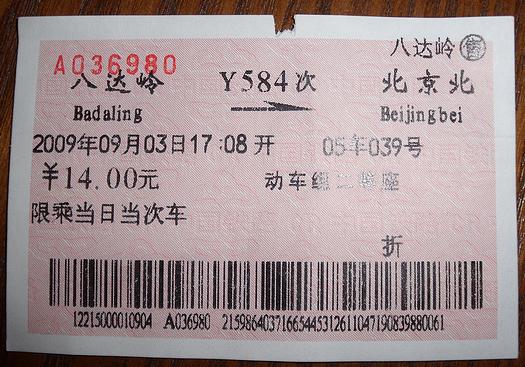 Here's the ticket I bought. The cost, 14 yuan, is a great deal: about US$2 for an hour long trip in luxurious comfort. The terminus is the Beijing North train station, which is right on Beijing's #2 subway route. That's a circular subway route that follows the path of the old Beijing city wall, so it's pretty convenient to get you where you want in Beijing's downtown. 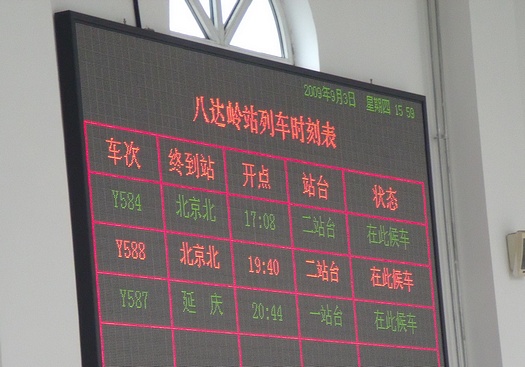 To the left in the picture of the waiting room you see an electronic sign. Sometimes it shows slogans in big letters, but it also shows the schedule for this station. Here you see that there are two trains left to Beijing: Y584 and Y588. The last train from the Badaling Great Wall of China to Beijing leaves at 7:40pm (19:40) on this day. Take that into account if you want to take the train back. 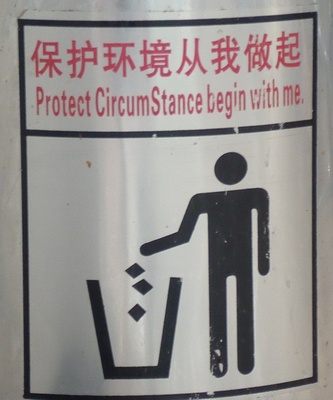 At the end of the row of seats below the sign was a garbage can with this sign. Inspiring, isn't it? 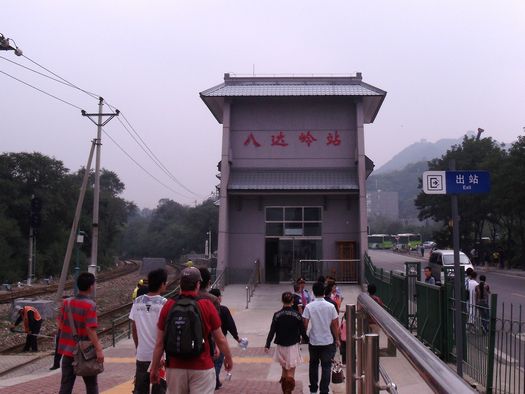 What you saw in the first train station picture above (the second photo on this page) is one end of the station. The other end is about the same size, with more seating. At the end of that is the door to the platform, which you're looking at here from the outside. At this small Chinese train station there is just one platform, with a track on each side. (This particular picture was taken on arrival at the station earlier in the day.) 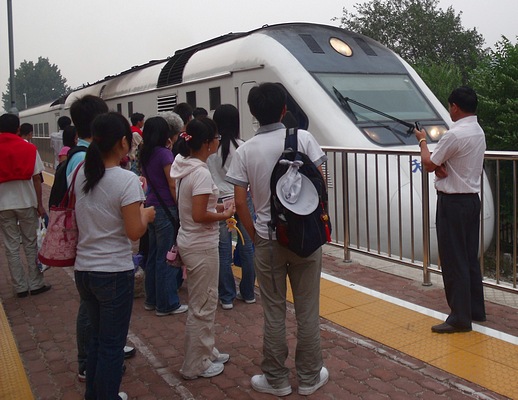 A few minutes before the train arrives, the ticket checkers open the door and the passengers troop out to wait on the platform. Here you see the train, just as it is pulling in to the station.

This ends the photo tour of my trip from Beijing to the Great Wall of China at Badaling. The hour-long trip back was comfortable and uneventful. That's the way it is with most train travel in China now. It's a long way ahead of the early 1990s, when people would climb in through train windows to grab seats.

I hope you get the chance to go to the Great Wall someday. If you want to go on a tour, fine, but then I suggest you go to one of the other Great Wall locations. If you're on your own, then the train from Beijing to Badaling, representing modern train travel in China, offers you a great way to get there - cheap, safe, convenient, and fast. Try it out!

Go to previous page in this Great Wall trip: Vendors, others, and souvenirs