Continuing our collection of funny signs in China, here are some more public domain photos. On my previous funny sign page I explained some of the reasons why these sorts of English mistakes happen. You've got to understand that linguistically English and Chinese are waaaaaayyy far apart. It is a huge job going from either of them to the other. If you're going to try, you've got to be ready to laugh at your mistakes.

My spoken Chinese is entertaining to my friends here, and if I tried to write Chinese signs I'm sure they'd get a lot more chuckles. I don't think they mind too much when I point out where some of the efforts for English signs in China don't quite work out as planned.

Sometimes though, I wonder what qualifications are required to be hired to design a sign in English. 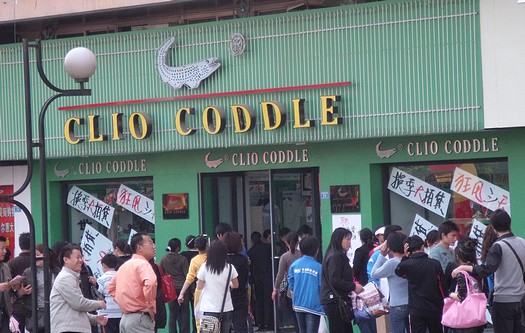 The photo above shows a busy shopping street in China. Modern China has a lot of walking streets full of clothing stores like this one. But what's with that name? It may be that this brand name was chosen to pretend to be a well-known Western brand. Say it quickly and you do get a reasonable approximation to the English term. Not only does the crocodile picture look strange, the spelling is different enough that maybe they can avoid some legal problems. Perhaps that was the intention; perhaps not. 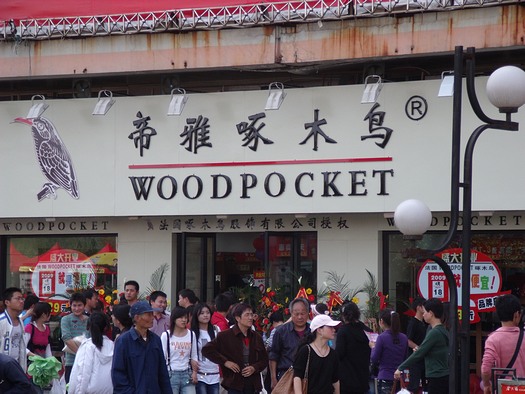 Here's another store very close to the Clio-coddle store. Another animal theme is close but not quite. The strange thing here is that I can't find on Google any famous Woodpecker brand that would mind them using the correct spelling! So... was this an attempt to be witty or memorable? 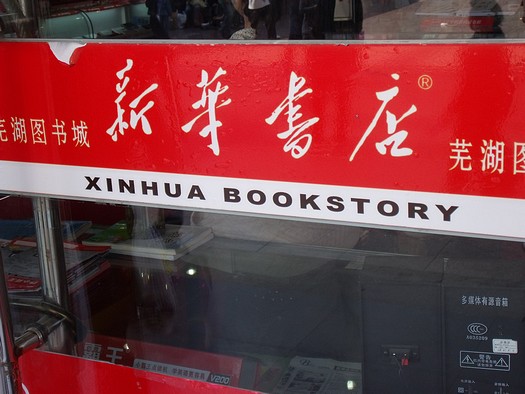 Branches of the Xinhua Bookstore are everywhere in China. It is a huge chain and very respected. So was this sign a very clever play on words or the result of a careless moment?

Near my home is this branch of one of the large Chinese banks. I assume that the people who work at the bank can spell the bank's name, but apparently the workmen who built the sign cannot. That's understandable. What's strange is that the sign has been that way for at least a decade! I wonder if the people working there have never noticed, or just didn't care enough to get it changed. 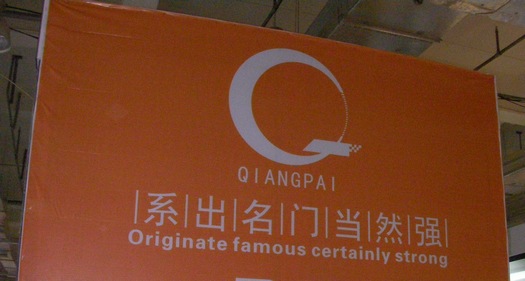 One of my Chinese friends says that the Chinese characters here are understood to mean that it comes from a famous place so the products of this brand must be strong or good. It seems to me that the problem here is that English requires connecting words to flesh out the idea, whereas Chinese readers expect to interpolate more. The result of just translating the Chinese characters is the choppy fractured English that you can see on many funny signs here in China.

This funny sign looks like it should be on a ski slope, but it's actually in a hotel bathroom. The first two Chinese characters literally translate as "small heart" but the meaning is "Be careful!". Using the wrong verb tense in English changes the meaning from "Be careful you don't slip" to what seems to be an order to do so, but carefully.

(I'm not sure what the four dragons are doing on the sign. Maybe they're just stylish, or maybe they're going to eat any careless sliders.) 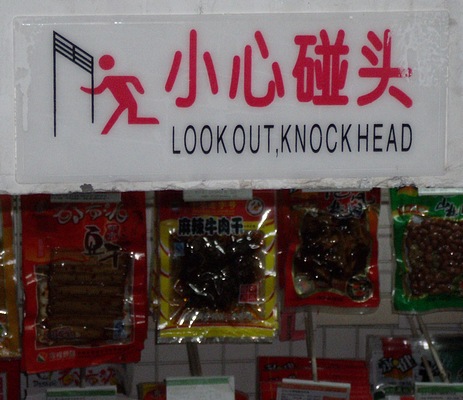 Here's another interesting one of the funny signs I've seen in China. The symbol seems to be a variant of the international "exit" symbol, but with the top of the door frame lowered.

The Chinese symbols say "Xiao xin peng tou" (pronounced roughly "shee-ow sheen pung toe"). "Xiao xin", as mentioned for the previous sign, means "be careful", "peng" means "bump into" or "knock against", and "tou" means "head". The translation "look out" is good, but the rest of the English sounds like an order to do exactly what the sign is intended to keep you from doing.

This same store (it happens to be in Beijing) had another sign that really interested me but sadly I didn't have a camera at the time and now it's covered up. It was in this same stairway and said

Huh? While it is wise to avoid earthquakes, I saw no reason to assume this stairwell was any more prone to these than elsewhere. It took me a minute to figure it out. It was supposed to warn you to not "slip" on the stairs. Somebody looked up the Chinese word in a dictionary and wanted to turn the verb "slip" into a noun. Listed nearby was a convenient, same-sounding noun so "slip" became "slippage" which is also a term for... yup - what causes earthquakes.

On the other hand, the English on this strange sign on a construction site didn't make any sense to my Chinese friend. The Chinese seems to say it's going to be a new base for commercial activity. The characters are shang wu (business, commerce), xin (new), ji (base), dian (dot, decimal point, a little, bit, spot, drop [of liquid], place, aspect, feature, appointed time, refreshments, node, peak, point). So where did "reedom" come from? Was it supposed to be "freedom"? But then where did that come from? Such are the mysteries of funny signs in China. 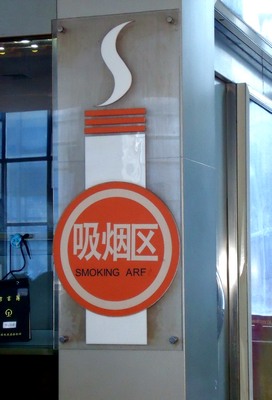 This is a funny sign because somebody rubbed out part of it. That could happen anywhere in the world, but this one caught my eye when I saw it in my city's train station. Perhaps this is a place for dogs who are on fire? 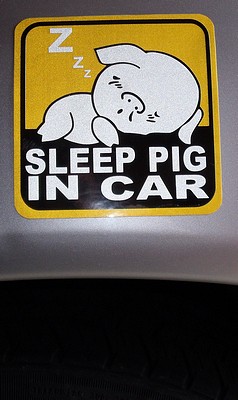 For a couple weeks, parked near our building was a sporty car that had this fairly large sticker on the square hatch over the gas cap. What do you think? Is it a variation on the “Baby on Board” signs? If so, what is it warning us against? Or is it an advertisement aimed at those wondering what to do with drowsy swine? Or maybe, a warning of a curse upon anyone daring to sleep in that vehicle?

A Chinese friend seemed equally mystified. She suggested maybe it was a warning that the driver was sleeping in the car, so should not be disturbed. "Sleeping" transmogrified to "Sleep pig"? And then they looked for a suitable illustration? It doesn't sound likely to me. I'd guess it's more likely to have something to do with the year of the pig in Chinese zodiac, but then what's the connection with sleeping? 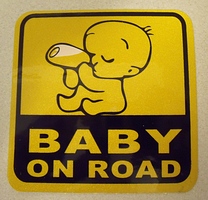 Speaking of "Baby on Board" signs, in China you can also buy the decal you see on the right here. It is close, but not quite what I expected to see. All sorts of images come to mind, don't they? There are other strange car decals for sale too - more examples of China's funny signs.

To add to the "sleep pig" mystery, a couple of months later I saw a beautiful, young woman wearing a shirt decorated with another pig drawing of the same style; it had to be by the same artist. This pig had blazing eyes though and a nasty-looking attitude, and the lettering around it boldly proclaimed "ANGRY PIG"! I'm not sure what statement she was making by wearing that...

Ah, the mysteries of English in China. The funny signs here prove that English teachers like me are still needed.

Go to first page of funny and/or strange signs.