If a single dragon is bad news, why would Chinese artwork include a screen wall with nine dragons? The answer is that in traditional Chinese culture a dragon is not the evil creature we think of in the West. The dragon is a symbol of strength and power without all the negative connotations. In fact, the throne of the Chinese emperor was known as the "Dragon Throne", symbolizing the strength of the emperor. 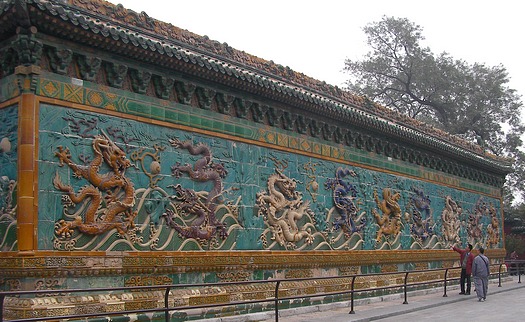 The wall (screen) you see in the public domain photographs here is in Beihai Park, northeast of Tiananmen Square and the Forbidden City. It is a traditional Chinese art form showing nine dragons. There is another nine-dragon screen in the Forbidden City, and one other famous one in Datong City of Shanxi Province. I have also seen a similar dragon wall in another Chinese city so there are others; these three are just the best-known. 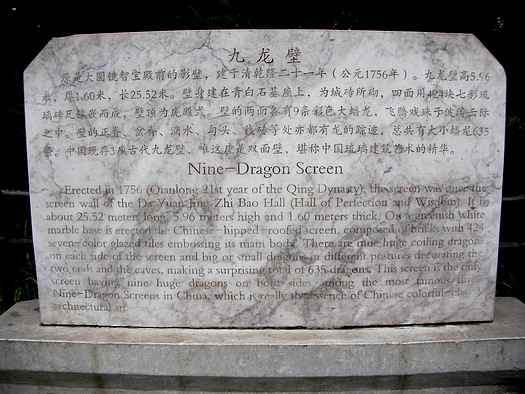 For ease of reading, let me repeat the English text of this stone, exactly as it is written.

Erected in 1756 (Qianlong 21st year of the Qing Dynasty) the screen was once the screen wall of the Da Yuan Jing Zhi Bao Hall (Hall of Perfection and Wisdom). It is about 25.52 meters long, 5.96 meters high and 1.60 meters thick. On a greenish white marble base is erected the Chinese-hipped-roofed screen, composed of bricks with 424 seven-color glazed tiles embossing its main body. There are nine huge coiling dragons on each side of the screen and big or small dragons in different postures decorating the two ends and the eaves, making a surprising total of 635 dragons. This screen is the only screen having nine huge dragons on both sides among the most famous three Nine-Dragon screens in China which is really the essence of Chinese colorful-glazed architectural art. 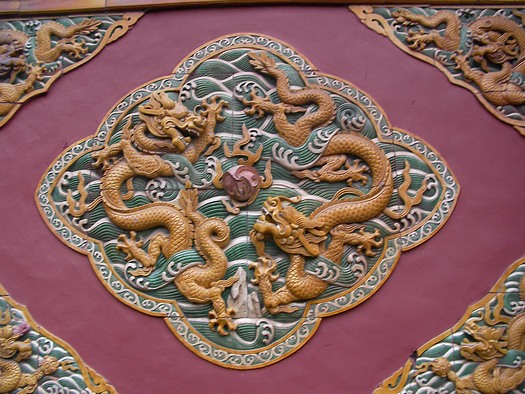 In traditional Chinese dragon art, the dragon is depicted somewhat like the dragons in the West: snake-like or lizard-like, and powerful. Typically though, a Chinese dragon is not portrayed as having wings or breathing fire. Here you see a couple of smaller dragons on the end of the nine dragons screen. They are long and sinuous like a snake, but have four legs like a lizard. 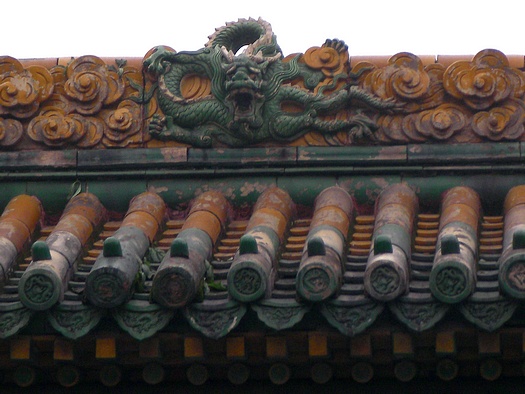 Above and below you see some of the Chinese dragons along the roofline of the wall. Note the length of the dragon legs, body, and neck. This is typical in pictures of dragons in China.

Below you can see a photo of one side of the screen, perspective adjusted. Notice the layout: yellow dragons on ends and in middle, with purple, white, and blue dragons between.

So that you can see more detail, below are the two photos I pasted together to make the panorama above. 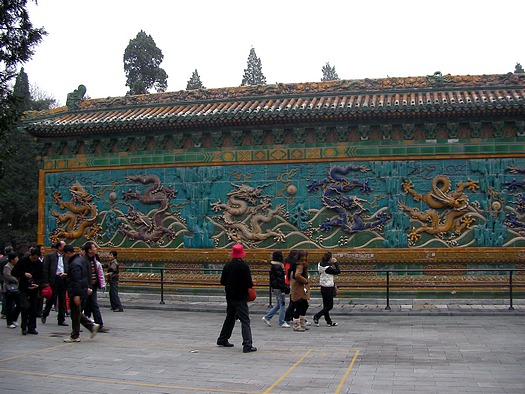 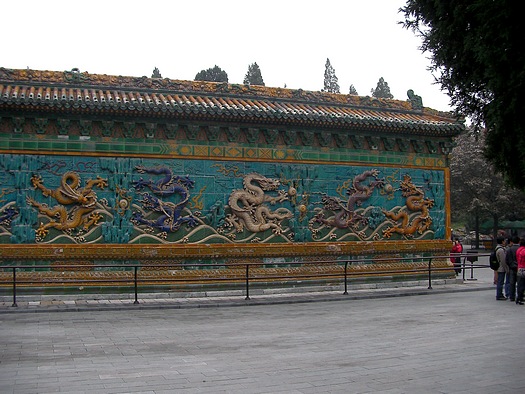 Finally, here is the other side of the two-sided dragon screen, showing that the wall actually has two sets of nine dragons. (I'd have varied the colour order of the dragons, but they never asked me.) 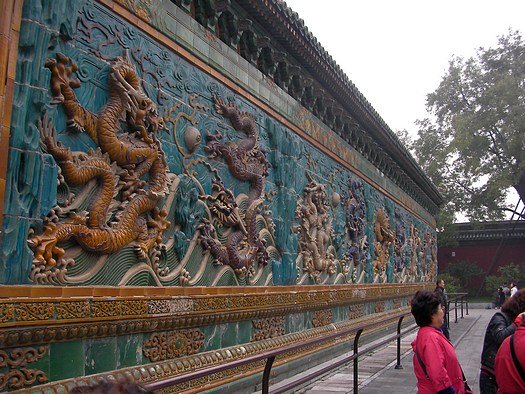 You may notice that the "yellow" dragons look more golden than yellow. That's true, but yellow is the royal colour in China so that's what it is.

This page has introduced this nine-dragon screen. Click here to see close-up detail pictures of the dragons here.

See more detail of the Chinese dragon artwork on this screen.